Mr. Bingley. Perpetual sidekick. Always in a good mood, kind, rich, and good looking. So why are we not as enamored of Mr. Bingley as of Mr. Darcy? Do we really prefer the dark and brooding Mr. Darcy over gentle and attentive Mr. Bingley? This week we ask you to decide which actor played Mr. Bingley best. Who, in your mind, was Mr. Darcy's best foil in a movie adaptation of Pride and Prejudice? We direct you to only the three latest cinematic Mr. Bingleys, as he is hard enough to remember as it is.
Your Favorite Mr. Bingley 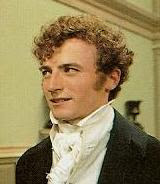 Crispin Bonham-Carter, Pride and Prejudice 1995
A director and distant cousin of Helena Bonham-Carter, Crispin played a polite Mr. Bingley who was always patient with Mrs. Bennet while not taking his eyes off Jane. The BBC said of Crispin's Bingley: "Mr Bingley is that wonderful combination of both nice, handsome and rich." Nice, yes. But also a bit boring. Would you agree? Crispin's acting career has been steady and consistent since his turn as Mr. Darcy's side kick.

Simon Woods, Pride and Prejudice, 2005
Simon's Mr. Bingley was an eager adoring puppy to Matthew Macfadyen's Mr. Darcy. Simon's next big role was as young Dr. Harrison in Cranford, showing that he does have leading man material. About his role as Bingley, Simon said: "Basically, his aim is to get married and, once married, to buy an estate and become a proper landed gentleman." Ho hum. One also assumes that Bingley must beget children. Let's hope his politeness ends at the bedroom door.

Tom Mison, Lost in Austen
Tom Mison's Mr. Bingley presents a twist in the Mr. Bingley oeuvre. His Bingley becomes a blubbering, crying fool for losing Jane to Mr. Collins and he actually turns on Mr. Darcy and blames him for his misstep! Tom turns in a comic performance that fits right in with the zany script, for in the end he does get his Jane. She must divorce Mr. Collins in order to be with her man, and thus the two set off for the COLONIES to avoid scandal. Such fun.

I liked Crispin B.C. best He is more than nice, kind and ever pleasant Mr. Bingley, a really good actor.

No contest really...Crispin Bonham-Carter played a character and not a caricature. I'm always so happy at the end, when he ended up with lovely, sweet Jane.

As I love the BBC Pride and Prejudice above all others, I had to go with Bonham-Carter. I genuinely like his portrayal, although in a looks throwdown, Woods is a better looking man!

Bonham-Carter's performance left me cold. A pleasant enough portrayal, but not particularly memorable. Woods was more fun and the better acted part, in my opinion. My favorite Bingley though? Tom Mison by far. His role called for a much wider range - from his infatuation with the exotic Amanda to falling in love with his Jane to the spiral downward into self-loathing drunkeness, he played it all beautifully. His talent (plus he's quite easy on the eyes) easily gets him my vote.

I have to second what LizzieJ said. Bonham-Carter did nothing for me. I liked Simon Woods, but Tom Mison was the best Bingley by far

Lost In Austen had the benefit of top quality actors who would have been just as perfect in any straight P and P adaptation. Tom Mison as Bingley showed more depth of character than I have seen previously, and remained believable even when Bingley was taken in a totally new direction.

I'm somewhat torn between Simon Woods and Tom Mison. Crispin Bonham-Carter plays a fine Mr. Bingley, but he doesn't really stand out. Simon Woods is goofy and vulnerable, which I think is great. But I have to go with Tom Mison. Not only is he the best-looking Bingley of the bunch, but I love how his character evolves. He takes the sweet, sensitive Bingley and turns him into a man who'll actually stand up to Mr. Darcy...and he still wins Jane in the end.

I liked all three Bingleys quite a lot, but I vote for Tom Mison - he displayed a wide range of emotions, from being funny and a bit goofy to totally desperate - it was great acting. And he is the most handsome of the three Bs, imo.
And I fully agree with kls010 : "Lost In Austen had the benefit of top quality actors who would have been just as perfect in any straight P and P adaptation."

Oh Simon Woods I think. The momentary look of pride he gives Jane when the family comes in after his proposal showed me there was more to him than his being just an affable goof. Bonham-Carter was fine, a little dull maybe. I've seen Lost in Austen, but I don't remember the Bingley in it.