The Falling Out Between The Prince Regent and Beau Brummell 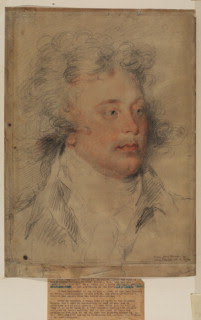 It is an historical fact that the Prince Regent and Beau Brummel had a falling out. The actual events are not known for sure, but here are two knowledgeable sources that speculate as to the nature of the rift.

In The Most Polished Gentleman, Cynthia Campbell writes, "There had been frequent minor quarrels in the past; one was in the Pavilion, when, as Captain Gronow recounts, Brummell had thrown his snuffbox onto the fire after the Bishop of Winchester had unthinkingly helped himself from it. The Regent, who, Gronow said, had a great reverence for Bishops, considered this action an unforgivable insult. They were never close after this, although they continued to meet." p.133

In The Wits and Beaux of Society, Grace Wharton and Philip Wharton write,

"A quarrel did take place between George the Prince and George the Less, but of its causes no living mortal is cognizant: we can only give the received versions. It appears, then, that dining with H.R.H. the Prince of Wales, Master Brummell asked him to ring the bell. Considering the intimacy between them, and that the Regent often sacrificed his dignity to his amusement, there was nothing extraordinary in this. But it is added that the Prince did ring the bell in question—unhappy bell to jar so between two such illustrious friends!—and when the servant came, ordered 'Mr. Brummell's carriage!' Another version palms off the impertinence on a drunken midshipman, who, being related to the Comptroller of the Household, had been invited to dinner by the Regent. Another yet states that Brummell, being asked to ring the said bell, replied, 'Your Royal Highness is close to it.' No one knows the truth of the legend, any more than whether Homer was a man or a myth. It surely does not matter. The friends quarrelled, and perhaps it was time they should do so, for they had never improved one another's morals; but it is only fair to the Beau to add that he always denied the whole affair, and that he himself gave as the cause of the quarrel his own sarcasms on the Prince's increasing corpulency..." 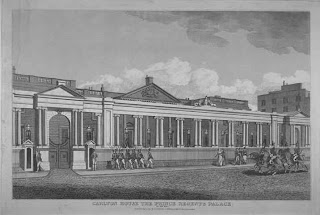 Cynthia Campbell goes on the say, "There was a final encounter. While waiting for their carriages after the opera, in a great crush, they came close. An eyewitness reported that Brummell was about to bump into the Regent. "In order to stop Brummel, therefore, and prevent an actual collision, one of the Prince's suite tapped him on the back, when he immediately turned sharply round, and saw there was not more than a foot between his nose and the Prince of Wales'. I watched with intense curiosity, and observed that his countenance did not change in the slightest degree nor did his head move; they looked straight into each other's eyes, the Prince evidently amazed and annoyed. Brummell, however, did not quail or show the least embarrassment. He receded quite quietly, and backed slowly step by step till the crowd closed between them, never once taking his eyes off those of the Prince....

By 1816 Brummell had such heavy gambling losses that he had to leave England to escape arrest for debt. He lived for many years in Calais, and later in Caen. With sad irony, the old age of the prince of dandies, the paragon of cleanliness, was one of imbecility, decrepitude, and disease. "His habits were so loathsome that an attendant could hardly be found for him." He died in a Caen asylum in 1840.

For a humorous doggerel recounting the rift, click on the link below:

Prince Regent According to Albert Igginbottom