On the anniversary of Jane Austen's death 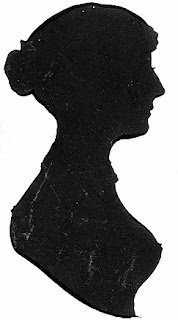 Jane Austen, 1775-1817: I have lost a treasure, such a sister, such a friend as never can have been surpassed. She was the sun of my life, the gilder of every pleasure, the soother of every sorrow; I had not a thought concealed from her, and it is as if I had lost a part of myself. I loved her only too well -- not better than she deserved, but I am conscious that my affection for her made me sometimes unjust to and negligent of others; and I can acknowledge, more than as a general principle, the justice of the Hand which has struck this blow.
Cassandra to Fanny Knight, July 20, 1817, two days after her beloved sister's death 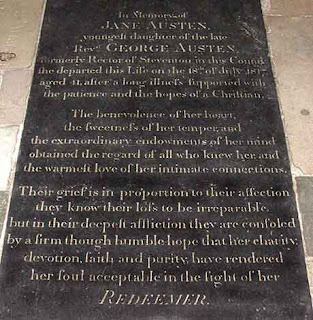 Although Jane Austen had been ill since fall of 1816, as late as May 27, 1817 she wrote a letter to her nephew Edward saying she was feeling better:

I know no better way my dearest Edward, of thanking you for your most affectionate concern for me during my illness, than by telling you myself as soon as possible that I continue to get better.-I will not boast of my handwriting ; neither that, nor my face have yet recovered their proper beauty, but in other respects I am gaining strength very fast. I am now out of bed from 9 in the morng* to 10 at night-upon the sopha t'is true-but I eat my meals with aunt Cass: in a rational way, & can employ myself, and walk from one room to another.-Mr. Lyford says he will cure me, & if he fails I shall draw up a Memorial and lay it before the Dean & Chapter, & have no doubt of redress from that Pious, Learned, and Disinterested Body.-Our Lodgings are very comfortable. We have a neat little Drawing room with a Bow-window overlooking Dr. Gabell's garden. Thanks to the kindness of your Father & Mother in sending me their carriage, my Journey hither on Saturday was performed with very little fatigue, & had it been a fine day I think I should have felt none, but it distressed me to see uncle Henry & Wm. K-who kindly attended us on horseback, riding in rain almost all the way.-We expect a visit from them tomorrow, & hopethey will stay the night, and on Thursday, which is Confirmation & a Holiday, we are to get Charles out to breakfast. We have had but one visit yet from him poor fellow, as he is in sick room, but he hopes to be out to-night. We see Mrs. Heathcote every day, & William is to call upon us soon.-God bless you my dear Edward. If ever you are ill, may you be as tenderly nursed as I have been, may the same Blessed alleviations of anxious, simpathising friends be yours, & may you possess-as I dare say you will-the greatest blessing of all, in the consciousness of not being unworthy of their Love. I could not feel this.

J. A. Had I not engaged to write to you, you wd* have heard again from your Aunt Martha, as she charged me to tell you with her best Love.

Alas, Jane died in her sister's arms on July 18, 1817. Today, there is a debate about the disease that caused her early death. (See the links below.) Mourning rituals and observances were fixed during the 19th century, and a lock of Jane's hair is preserved to this day (see the sidebar in this blog). I wouldn't be surprised (though I have found no corroboration of my suspicion) that Cassandra or Mrs. Elliot, Jane's mother, wore a locket with a sample of her hair.

Mourning heart locket, 1800-1820, typical of its day and often filled with the hair of a loved one.

Read more about about this sad period in the life of the Austen family: 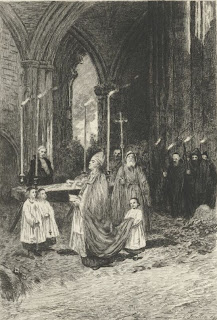 I guess, I will focus on Jane's illness then, whether it's Addison or something else. Read it somewhere in Tomalin, perhaps.

Thanks for the lovely post, and for the heart locket as well. Would Cass keep one for Jane? I wonder...

The Upfal article from 2005 is extremely informative. Constant infection in her 20s could explain how "silly" "husband-hunting" and flirty young Jane ended up unmarried at the time of her death.

I found it particularly interesting that, concerning one ball in her 20s, Jane wrote of the men being uninterested in dancing with her as if it were a fluke. But she didn't connect it to the obvious eye infection she had at the time!

Thank you very much for posting that

Nice story as for me. It would be great to read a bit more about this theme. Thank you for sharing this info.
Sexy Lady
London escorts