Review of Confessions of a Jane Austen Addict 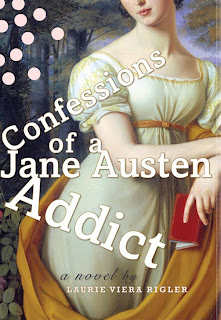 Imagine waking up in someone else's body in another time period with no clue of how you got there or how you'll make it back home. That's the situation author Laurie Viera Rigler has set up in Confessions of a Jane Austen Addict. One day our heroine Courtney Stone wakes up as Jane Mansfield, a 30-year-old spinster living in turn of the 19th Century England. The day before she was in Los Angeles nursing her hurt over a breakup with a lout of a boyfriend, and the next thing she knows she is confronted by a strict, harsh-eyed Regency mama who deplores her daughter's unmarried state.

Laurie Viera Rigler takes us on a fun and frothy romp through the Regency period as our heroine encounters one bewildering situation after another trying to understand what's happened to her and why. Readers who are expecting a time travel novel with the depth and breadth of Diana Gabaldon's Outlander series might be disappointed in this book's superficial fun. But the fans that adored Jude Devereaux's Knight in Shining Armor or the time travel movies Somewhere in Time, Kate and Leopold, and Big will definitely have a rollicking good time.

The themes of intrigue, romance, and a fish out of water are fleshed out with the cultural shocks that our heroine experiences as she becomes accustomed to a world of chaperons, lack of running water, a cool and calculating mother, and unhygienic hostelries. What I found most interesting about this time travel book is that as Jane, Courtney looks entirely different. In her regency persona she is taller and prettier, and can embroider with the skill of an experienced seamstress. Although Courtney has all of Jane's talents and some of her memories, her thoughts and emotions are rooted in the 21st century. This dichotomy places us firmly in the mind of our bewildered heroine, who as Courtney is exceedingly attracted to the suitor her alter ego Jane rejected. It doesn't hurt that our hero, Charles, is as dapper as Mr. Darcy or Captain Wentworth.

There are a few problems of logic, as all time travel novels share. Jane's strange behavior and lack of memory are explained away as the result of a fall from a horse. And although Courtney was an avid reader of Jane Austen's novels, as Jane she has a hard time coming to grips with the lack of baths and ready-to-wear dresses and a tightly circumscribed world that is not as romantic as she had once thought.

As a reader who is interested in the Regency Era, I would also have loved to have read more details about dress, manners, interiors, and architecture. These were spare, but because of this economy of detail, the book moves along quickly. Frankly, I couldn't put it down at times. I also have a confession to make: This is the first Jane Austen fan book or spin off that I have finished. Confessions of a Jane Austen Addict is as light and pleasing as a summer sherbet, which, as we all know, is a perfect tonic for a hot summer day.

I am reading this book now and very much enjoying it. Glad to find your blog - very nice reading from one Austen fan to another :)
Tanya

She's an old friend I've lost touch with and I didn't know she had this book coming out! I just ordered it. She's a great person: beautiful, smart, loyal and very, very funny.

[funny how the web works -- so well. I was over at Princess Sparkle Pony's for the latest and saw your comment and realized I hadn't check out DishNDat for awhile and then here!)