Seen on the Blogosphere: Billie Piper as Fanny Price

To prepare Jane Austen Masterpiece Classic fans for the critiques and reviews that will shortly arrive after Mansfield Park has aired tomorrow night on PBS, Ive collected a few quotes about Billie Piper as Fanny Price, including a few pithy comments from Billie herself. 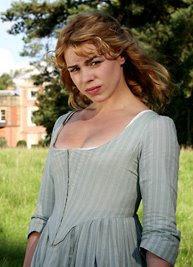 One of the things she says she has learnt playing Fanny Price, the redoubtable heroine of Austen's Mansfield Park, is that life in the early 19th-century wouldn't have suited her one bit. "You realise the pace of life was so slow - everything takes so much longer. Our natural pace these days is so quick. If you wanted to travel anywhere it would take you two days. If you wanted to write to people, the same. Everyone would walk slower, just simple things like that."

Billie says that as a result, she finds period dramas can often be a little plodding. "I've always had an issue with period dramas. I love the language but sometimes it's just a bit too slow or stuffy and sometimes, frankly, it's a bit boring. That's my experience." This adaptation of Mansfield Park, she says, will offer just a little more pizzazz. Clicking her fingers to give an idea of what she means, she says, "This one moves like that and it feels very real. It's a real family with real dynamics." One of the things that Billie has learnt is that life wasn't just slower: it was harder too.

"It would have been a nightmare to have been a young woman then. They must have had stomach ulcers from having their internal organs squished up inside them, and women didn't really get to say anything - they just had to get on with it and shut the f**k up." As, indeed, did Billie, when it came to wearing period dress. "I had 12-hour days in this thing," she says. "Sometimes they'd loosen you off for lunch, but basically you were tied in to it at the beginning of the day and then you'd have to negotiate everything - when you pee'd, what you consumed. I started drinking isotonic drinks - they rehydrate you but you don't have to go to the loo." And, though it pains us to ask, what happens when you do? "I've got a technique. I straddle the loo, I sit facing the wall and let my dresses fall behind me." - Radio Times 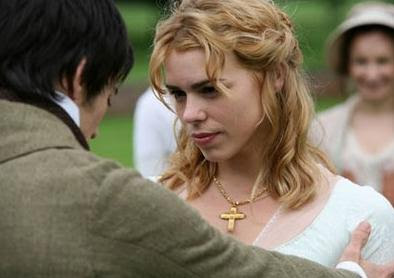 Billie Piper was all nerves filming a new costume drama for ITV1 in case her boobs fell out of her corset. Curvy Billie, 24, Fanny Price in Jane Austen’s Mansfield Park, said: “When you bend over you worry they’ll pop out.” She has now vowed to take a break from corsets for the time being.- The Sun

Fanny Price of “Mansfield Park” is an innocent of a less giddy and more melancholy kind, and the actress Billie Piper plays her looking wrecked. Her hair is a mess, blond and unkempt, and her eyebrows entirely a different color, which seems to suggest that even in the English countryside of the very early 19th century, a good dye job wasn’t an easy get. - Ginnia Belafante, The New York Times

Immediately, she jarred my eye. She looked all wrong. She looked too present day. I sat pondering for a minute or two as to why that was; she was of course in full costume along with everyone else, so why did she look so out of place? I quickly realised I was entirely distracted from the storyline, and indeed the entire programme, by her appearance. It took me some moments to realise that it was her eyebrows that were causing my dismay; they were as incongruous as two monstrous futuristic cyber-caterpillars in the early 19th century setting. They were a completely different colour to her hair. That, of course, was because her hair was very obviously bleached, in a very 21st century manner. This train of thought then prodded me to notice that she actually had dark roots creeping ominously through. - Tales from the Canal Side

Billie Piper's acting and casting have come in for a variety of opinions, with some people thinking she was excellent and some thinking she was miscast, but overall, here on the blog, we liked her. "I think it is one of JA's better books and enjoyed the tv adaptation," says Wendy. "It's very easy to criticise the costumes and such but shouldn't we stop worrying about details and simply enjoy being entertained? When all's said and done, isn't that what every tv programme and books strives to do? Having said all that, I did think that anyone unfamiliar with the book would wonder what Mrs Norris was all about. The adverse effect she had on Fanny's upbringing wasn't apparent from tv. I hated Fanny's hair and agree that she ran around too much - she was supposed to be the ultimate poor relation, after all - but I still sat spellbound for two hours" - Historical Romance UK

This is not to be borne.

She didn't read the novel; she finds period dramas boring; she used the queen mother of all expletives in her interview; she described in detail how she sat on the "loo" in her costume; and she thinks she did an artistic service in wearing a cleavage-mashing corset and fitted dress for this regency-period piece.

I do like to give the benefit of the doubt, however Billie Price's artistic sensibilities seem horrifyingly in keeping with her disastrously coarse portrayal of the most reserved, shyest, measured character ever to inhabit Jane Austen's literary world. What in the WORLD were the casting, directing, producing, costuming, and for heaven't sake PUBLIC RELATIONS people thinking? A travesty, an absolute travesty.

I found her travails with her costumes and her bladder quite interesting.