The Jane Austen Book Club Is Now Available on DVD

When you begin to love Austen, her world doesn’t seem that antiquated. Her characters worry about money, deal with embarrassing family members, cringe at social slights, and spend more time than they should hoping to fall in love, even when the local prospects don’t seem that promising. In short, her people are just like us—but without the commute and the twelve-to-fourteen hour workday. - Robin Swicord, Director of The Jane Austen Book Club

On February 5, actresses Kathy Baker, Maggie Grace, and Amy Brenneman and director/screenwriter Robin Swicord graciously assembled at the Barnes & Noble store at The Grove in Los Angeles for the DVD signing for "The Jane Austen Book Club." Even though it was Super Tuesday, a good number of fans turned up to meet the cast and purchase the DVD, which is based on the book by Karen Joy Fowler. 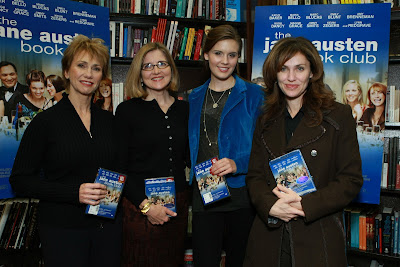 The PG13 rated film was made with a budget of $6 million, and shot on a tight schedule of 30 days. Even given their limited time together, the actresses admitted that they had become great friends, which rarely happens in Hollywood. Interviewed by the Philadelphia Daily News, Kathy Baker revealed that "we all gave each other books for cast gifts. And we all read the Austen books we needed to read for our characters. " This included Hugh Dancy, who always had his nose in a book, and who played Grigg, the lone male member of the book club. Maggie Grace (Allegra) admitted that she has always been a huge Austen fan, or "one of those Austen-ites," as Ms. Baker noted with obvious affection.

In a two-part interview in this blog last September, Robin Swicord said, "Working with this cast was sheer pleasure. We kept an attitude of play throughout both rehearsal and the production, which began with our own lame attempt at a book club meeting (only Maggie Grace actually did the reading), and paid off especially in the eight large group scenes, when we had three cameras capturing performances in scenes (sometimes eight or ten minutes long) that were allowed to run from beginning to end without interruption." 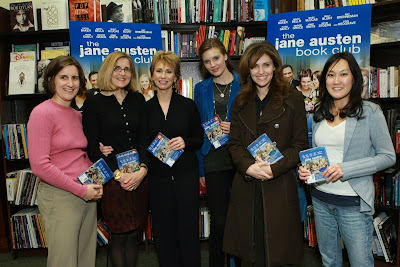 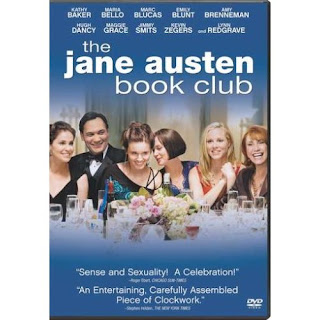 The cast is sterling, and the film's characters are as varied as any of the heroes, heroines, and eccentrics in a Jane Austen novel. In a review on Amazon.com, A.T. Hurley writes: "The film centers on a group of six friends in Sacramento, Calif., who gather to distract themselves from loss (a newly dumped Sylvia, played with grace and quiet pain by Amy Brenneman), repressed disappointment (the prissy teacher Prudie, played by Emily Blunt), or a life of unrealized dreams (Jocelyn, played by Maria Bello, whose acting skills have gained great nuance, both in comedy and drama). All are devoted Austen fans, except the lone man, Grigg (Hugh Dancy, adorable and available, ladies), who has an ulterior motive for joining the chick-lit gang. As the months unfold, we learn about the relationships of all the members, and watch as elements of Austen's novels and characters pop up with enchanting regularity."

MAGS, the discerning editrix at Austen blog recommends this movie highly. I couldn't agree with her more.
Posted by Ms. Place, Jane Austen's World
With invaluable help from Laurel Ann, Austenprose
at 2/08/2008

I added this DVD to my Netflix list today. I can't wait to see it. Thanks for the great post.