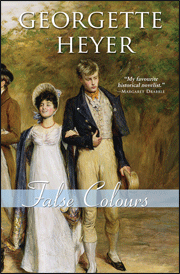 It was past two o’clock when the job-chaise turned into Hill Street; and, as the watchman wending his way round Berkeley Square monotonously announced, a fine night. A full moon rode in the cloudless sky, dimming the street-lamps: even, as the solitary traveller had noticed, in Pall Mall, where gaslighting had replaced the oil-burners. Linkmen, carriages, and light streaming from an open door on the east side of Berkeley Square indicated that not all the members of the ton had left London; but at the end of June the Season was drawing to a close; and it did not surprise the traveller to find Hill Street deserted. It would not have surprised him if the knocker had been removed from the door of a certain house on the north side of the street, but when the chaise drew up a swift scrutiny reassured him: the Earl of Denville’s town residence had not yet been abandoned for the summer months. - Opening lines of False Colours

What do you get when you fill a book with romance, comedy, missing twin, mistaken identity, beautiful but spendthrift mother, Napoleonic history, dashing and diplomatic hero and sensible heroine? Why, Georgette Heyer's False Colours, of course.

The Honourable Christopher Kit Fancot returns to London on leave from the diplomatic service to find that his twin brother Evelyn has disappeared and his extravagant mother's debts have mounted alarmingly. The Fancot family's fortunes are riding on Evelyn s marriage to the self-possessed Cressy Stavely, and her formidable grandmother's approval of the match. If Evelyn fails to meet the Dowager Lady Stavely in a few days as planned, the betrothal could be off. When the incorrigible Lady Fancot persuades Kit to impersonate his twin (just for one night, she promises) the masquerade sets off a tangled sequence of events that engage Kit's heart far more deeply than he'd ever anticipated with his brother s fiancee who might know much more about what's going on than she cares to reveal...

In this book, one of Georgette Heyer's best loved novels, the author combines her extensive knowledge of history with her talent for spinning a witty romantic tale. Heyer's eye for detail, character development, and talent for moving a story along is masterful:

He then turned towards her companion, smiling at her, and carrying the hand she extended to him to his lips. He thought that that was probably what Evelyn, a practised flirt, would do; but even as he lightly kissed the hand he was assailed by a fresh problem: how the devil ought he to address the girl? Did Evelyn call her Cressy, or was he still on formal terms with her? He had had as yet no opportunity to take more than a brief look at her, but he had received the impression that she was a little stiff: possibly shy, certainly reserved. Not a beauty, but a goodlooking girl, gray-eyed and brown-haired, and with a shapely figure. Well enough but quite unremarkable, and not at all the sort of female likely to appeal to Evelyn. At this moment, and just as he released Miss Stavely's hand, one of the assembled company, and elderly spinster who had been observing him with avid curiosity, confided to a stout matron in the over-loud voice of the deaf: 'Very handsome! That I must own!" Startled, and far from gratified, Kit looked up, involuntarily meeting Miss Stavely's eyes. They held a look of twinkling appreciation; and he thought suddenly that she was more taking than he had at first supposed. 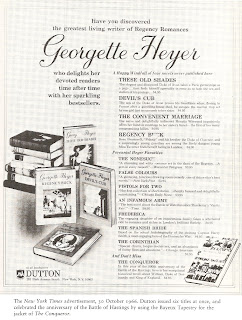 Georgette wrote False Colours in 1963, at a time when she was developing a relationship with a new publisher. The author seldom missed a detail. When she received the first draft for the False Colours blurb, her response was instant and decisive:

. . . and I did not say that I was especially fond of False Colours! What I may well have said was that I don't think it stinks as much as The Nonesuch. It is not my favourite - The Unknown Ajax and Venetia are the best of my later works. My style is really a mixture of Johnson and Austen - what I rely on is a certain gift for the farcical. Talk about my humour if you must talk about me at all!. . .I don't know about my historical feeling: I'd prefer a timely word about my exact detail! . . . I did warn you that I was hell-to-deal-with, didn't I?. . .I know it's useless to talk about technique in these degenerate days - but no less a technician than Noel Coward reads me because he says my technique is so good. I'm proud of that." (The Private World of Georgette Heyer, Jane Aiken Hodge, P. 152-153)

SourceBooks is rereleasing a select number of Georgette Heyer novels this season, starting with False Colours in March, and ending with Royal Escape in June (review coming soon). For sheer fun and entertainment, I highly recommend this novel and give it my highest rating of three regency fans.

Thanks for these Georgette Heyer reviews. I'm sitting in hospital and kinda bored and I was hoping to find some GH books online. I haven't found any but you reviews are the next best thing!