The Conqueror: A Review of a Georgette Heyer Historical Novel 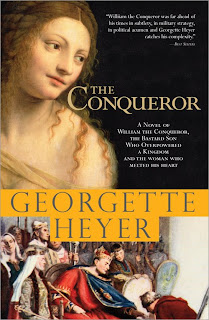 Inquiring readers, Hillary Major kindly agreed to read and review Georgette Heyer's historical novel, The Conqueror. Written when Ms. Heyer was still in her twenties, this novel takes William from birth through the Battle of Hastings, the event that made him a British king. This is Ms. Major's second review for us (thank you, Hillary, for your excellent insights). Her first Heyer review on the Royal Escape can be found at this link.

With the story of William the Conqueror, Georgette Heyer tackles history on a grand scale and, in doing so, she provides her readers with a larger-than-life hero. While (atypically) Heyer does not provide specific references for The Conqueror, it is clear that this thoroughly-researched novel draws from a gamut of historical sources, including The Anglo-Saxon Chronicle, the details of the Bayeaux Tapestry, contemporary and near-contemporary accounts, and modern analyses. In his own time, William was already a legend, and Heyer chooses to incorporate these legends into her account. Thus, we first meet William on the day of his birth, his mother, a burgher’s daughter, having dreamed of a great tree stretching from Normandy across the Channel to England. When visited by his nobleman father, newborn William stretches out his hands to grasp his sword.

Alongside the myth, however, Heyer presents a William who owes much of his success to practical and military innovations, including quick troop mobilisation and trained archers. She emphasizes the struggles he faces as a bastard son in a hierarchical medieval society, including repeated assassination attempts from his own courtiers. William’s dreams (whether you describe them as nationalist, imperialist, or simply ambitious) are big, but he is able to accomplish them with careful strategy, execution, and, yes, a certain ruthlessness.

If any aspect of the novel strains the reader’s credulity, it is the haughty heroine rather than the singular hero. Heyer may be anachronistic in giving Lady Matilda the freedom to choose or reject William’s proposal though, as a widow who has already done her familial duty and a favorite of her indulgent father, Matilda enjoys considerably more latitude than her female contemporaries. Even if Matilda’s ability to chart her own nuptial course, unswayed by mere political concerns (such as William’s station or his direct petition to the Pope), is accepted, her obsession with William’s violent potential ultimately comes across as silly:

She lifted her arm and observed a bruise like a shadow on the flesh. Her fingers touched it. Jesu, the man knew not his own strength! She shook her head at it, frowned in an assumption of anger, but ended by thinking no worse of him for his rough handling. If she kindled him to a blaze and was herself scorched she would not blame him for that. His fingers had crushed her soft flesh so that she had to stifle a cry of pain. She knew herself at his mercy, and could not be sure that he dealt in so gentle a virtue. Yet she could be calm before his brute strength; what fear she nursed she kept for the intangible power he held over her. It crept up to set her shivering in the fastness of her chamber, and stalked beside her even when he was furthest away. If she was already both wife and widow she had still borne a virgin heart until Normandy strode up her father’s audience-hall, and bent his hard stare upon her." 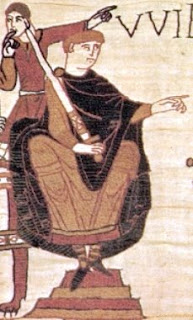 Fortunately, The Conqueror at its heart is more of a buddy story than a romance, for the novel also tells the story of fictional Raoul de Harcourt, an idealistic young nobleman who believes William will bring stability and social justice to Normandy. As Raoul faithfully accompanies William in a series of adventures that leads ever-closer to a climactic account of the Battle of Hastings, we observe magnanimity and deliberate cruelty, political blackmail coupled with a reverence for the feudal codes of fealty, apparently devout prayer followed by wily manipulations of clergy, and friendship at war with ambition. It is through the lens of Raoul’s (fairly modern) sensibilities that we readers view William, a device that allows us to come to our own conclusions regarding William’s motivations and merits and encourages us to take a stance on some intricate and messy ethical issues. Even in its most unlikely depictions, The Conqueror delivers an enjoyable read, but in its best moments, it challenges us to examine our own allegiances in a time that may be just as volatile and uncertain as Heyer’s eleventh century.
These Georgette Heyer books, available this holiday season, will be reviewed on this blog and Jane Austen's World through mid-December: Cotillion, Simon the Coldheart, The Reluctant Widow, Faro's Daughter, and The Conqueror. See our reviews in the sidebar.

Fascinating. This review convinces me to try one of her historical novels. Which do you recommend first?

Sounds terrific--I'll put it on my Amazon wish list.

Oh, Georgette, you and your extra-alpha alpha males. *rolls eyes*

My favorite of her heroes are the very masculine but not really alpha Kit Fancot and the adorable and not at all alpha Freddy Standen. Both gentlemen share the admirable trait of being dependable in a social crisis. Way better than the broody, borderline abusive Mark I models.

Who knows where to download XRumer 5.0 Palladium?
Help, please. All recommend this program to effectively advertise on the Internet, this is the best program!