The Talisman Ring by Georgette Heyer, A Review 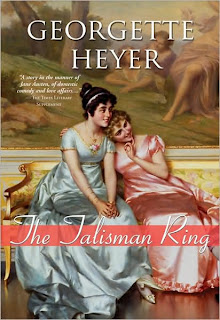 My fellow Janeite on the James colleague, Hillary, read The Talisman Ring and reviewed it for you in this post. This 1936 novel was one of Georgette Heyer's earlier efforts. The light-hearted romp - full of comedic twists and double entendres - was set in Sussex, where the author lived at the time.

The Talisman Ring is one of Georgette Heyer's earliest novels, and as a genre bender, it holds a unique place in her work. Not merely a romance, the book is also a mystery and a detective novel, with a soupçon of action and adventure thrown in (including a wild ride through the English woods, an encounter with a band of smugglers, and a little old-fashioned breaking and entering). Moreover, instead of one pair of lovers, Heyer provides us with two. In the first chapter, the practical Sir Tristram Shield dutifully promises his dying uncle that he will marry and provide for his cousin Eustacie, a young noblewoman raised in France and not at all grateful for a rescue from the guillotine if it means being condemned to the quiet country environs of Lavenham Court. Soon Sir Tristram is acting as executor of the estate, since the rightful heir, hot-headed Ludovic Lavensham, has fled the country under suspicion of murder. When Eustacie runs away from home and encounters Ludovic, Sir Tristram's vow to his uncle is placed in imminent danger. Conveniently, the intrepid Miss Sarah Thane – a lady traveler lodging at the local inn along with her comically obtuse brother (a jolly good fellow who happens to be a justice of the peace) – sets her cap for Sir Tristram. Add to the mix the absurdly foppish Beau Lavenham, a rival for the inheritance of Lavenham Court and the attention of the ladies, and thus begins the search for the talisman ring, a token that might prove Ludovic's innocence . . . and another's guilt.

This reader's overall impression of the book is one of frivolity: quite a bit of fun with very little substance. While Eustacie's girlish romanticism is to be expected, the supposedly older and wiser Sarah Thane turns out to be just as silly, perfectly willing to masquerade as a dull-witted antiques enthusiast in order to help search for secret hideaways in the wainscoting of a suspect's home library. Even the most intriguing historical details, such as the introduction of the Bow Street Runners, forerunners of modern detectives, are handled with a comic touch, as the two Runners find their investigations foiled by Eustacie and Sarah's enthusiastic amateur efforts. One can imagine that Heyer took great delight in researching the excesses of men's period attire, which manifest themselves in combinations as bizarre as primrose pantaloons and a lilac-striped coat, topped off by a fur-lined cloak and sugarloaf hat. Ultimately, one can well sympathize with the beleaguered Sir Tristram and the bewildered Sir Hugh Thane, who remarks peevishly that "This is the queerist inn I've ever stayed at in my life."

Amidst all of these humorous flourishes, the reader may be willing to forego more plausible storylines or fully rounded characters. The Talisman Ring is not a great novel, but rather a light-hearted romp that promises smiles to the pleasure reader.
Posted by Vic, Jane Austen's World
at 5/14/2009

I LOVE LOVE LOVE This one! It's so awesome and funny! And one of my absolute favorites of Georgette Heyer! Thanks for the review! Jenni

I'm so enjoying your blog. Have voted for my favorite Darcy, and most aptly named character,ie.Knightley/Wickham.
Thank you for book review(s), I'll be adding several of Georgette's books to my summer reading list!