Gentle Readers: The Grand Sophy by Georgette Heyer was re-released on July 1st by Sourcebooks. Joining us today is Regency Romance author Monica Fairview who will chat about one of Heyer’s most famous heroines, Sophy Stanton-Lacy, who she feels is “one of the most memorable and colourful characters in modern literature.”

No, it isn’t a children’s book. It’s Georgette Heyer’s delightful heroine, “dear little Sophia” who sweeps through The Grand Sophy and brings chaos to the very ordered world ruled by Charles Rivenhall. Sophy, of course, is not little, and the discovery that she is a tall, very self-possessed, independent woman is the beginning of the disorder that threatens everything that everyone has taken for granted so far.

This is only one example of Georgette Heyer’s amazing craft. Because once she has introduced the idea of Sophy as a child, there is some level at which we respond to her as if she is. What’s delightful about The Grand Sophy is that it appeals to the mischievous child in us as much as it appeals to our adult romantic side. It’s about things a child would delight in; about stuffy adults screeching at the sight of a monkey, about parrots using the language of “horrid rough sailors”, about breaking all the rules and getting away with it. It’s about defying authority – whether that of the overly dutiful Charles Rivenhall or of his fiancée Miss Eugenia Wraxton.

Only Sophy isn’t a child. She’s a brilliantly intelligent young lady who knows very well how to bend social rules and use them to her advantage. But since she also has a streak of the heroic, she does not bend the rules for her own selfish end, but to set right what she perceives is wrong in the world around her. As one of the characters says, “Do they tread blindly towards their doom, Sophy, or did they willing receive a firebrand into their midst?”

At the hands of a lesser writer, Sophy could have been an annoyingly managing female. In this she has something in common with Jane Austen’s Emma, who is also convinced she knows what is best for everyone. Just as Emma sets out to arrange everyone’s lives – especially their marital prospects, Sophy, too, proceeds on the assumption that she had better rearrange everyone’s lives. But the two writers approach the same kind of character from completely different angles. 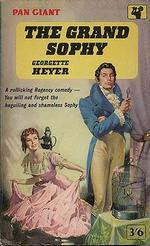 Heyer did not intend her heroine to be fallible. The title really says it all. She is the Grand Sophy, a figure bigger than life. It’s a swashbuckling romance, with a heroine who rides through it with her pistols and rescues everyone from unquestionable misery. And as an audience watching the action unfold, we cheer Sophy on, hoping that she will succeed in her goals. Unlike Emma, who muddles her way through, and who bases all her plans on mistaken assumptions, the Grand Sophy, versed in military tactics, launches her attack and never wavers from it for a moment. Again, it is no coincidence that a pistol features in three very crucial scenes, all of them revealing her unwavering determination and “iron composure.”

It’s very unfortunate that one of the three scenes featuring a pistol demonstrates racist stereotyping of the most blatant kind (it certainly made this reader squirm) in the case of the money lender. Particularly when Heyer succeeds in breaking down stereotypes of women by having Sophy refuse to fit into any of them. And she does avoid stereotyping very neatly in the case of the Spanish Marquessa, Sancia, who, despite being lethargic and prone to inviting her guests to take a siesta, is a well-rounded character, and is one of my favourite secondary characters in a cast that is quite extensive.

Ultimately, the irrepressible Sophia rises above the faults of the novel and brings us one of the most memorable and colourful characters in modern literature. There really is no one quite like the Grand Sophy, and if she has brought into being a whole genre of Regency romance full of “feisty” heroines, still, they cannot compare. For, as Sancia sums it up, “One does not know what next she will do, or, which is worse by far, what she will make one do that one does not wish at all.”

Thank you Monica for your lovely tribute to a most worthy young lady. I too have fallen for Sophy and enjoyed the book greatly.

Monica Fairview’s fascination of the Regency period was inspired by the novels of Jane Austen and Georgette Heyer. A former literature professor, she now writes Regency Romances. Her first novel An Improper Suitor was released in 2008 to much acclaim. Her new novel The Other Mr. Darcy has just been released in the UK, and will also be issued in an American edition in October by Sourcebooks. You can visit Monica at her blog and website for further information on her novels and read chapter excerpts. She also contributes to the blog Historical Romance UK and tweets regularly on Twitter.

Enter a chance to win one of five copies of The Grand Sophy and a set of ten Georgette Heyer novels from Sourcebooks. Contest ends July 31st.

I love your blog so much! I haunt it daily. I have an award for both of you.

I'm sorry that this has nothing to do with this post. I just thought you all would like to see the trailer for the new Emma. http://www.bbc.co.uk/pressoffice/pressreleases/stories/2009/07_july/09/bbcone.shtml

You have to rotate through the boxes to find it, but it's there, believe me!

Great post. My sister in law showed up with a Hayer book over 4th of July weekend and I was so suprised after seeing the buzz on blogs. I'll have to try this book!

Hilarie, thanks for the award! Vic & I try to have fun everyday here. Glad you enjoy it.

Thank you, Hilarie, what a wonderful award. And we love your visits to our blog. (Love your blog template too!)

I love Georgette Heyer but this character is certainly out of the ordinary and convention!!! And, its really amusing till the end.