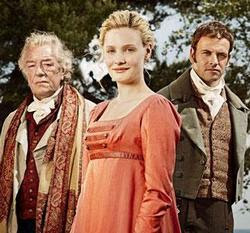 The new BBC1 miniseries of Emma will shortly become reality when it begins airing in the UK on October 4. This four-part costume drama is being adapted from Jane Austen’s novel by Sandy Welch (Our Mutual Friend) and stars Romola Garai (Atonement) as the "handsome, clever and rich" but misguided Miss Emma Woodhouse and Jonny Lee Miller (Edmund Bertram in Mansfield Park 1999) as her reproachful neighbor Mr. Knightley.

Two weeks away from air date, and very little press so far. Since the BBC announced that it was “moving away from traditional 19th century-set "bonnet" dramas in favor of a grittier look at the period and a new focus on other historical eras,” I am not surprised at the revamping of Emma toward more emotion and drama. A recent headline of an article in the Telegraph proclaimed “BBC banishes stuffy period characters from new Emma drama” and that the new story has been updated to give it a modern romance. Kate Harwood, controller of BBC serials explains their reasons for the changes.

We didn't want stuffy period characters. This is not a high Austen comedy, it's modern. Maybe we are in a period where we are a little bit more relaxed with Austen. We are taking her off the literary shelf and making her seem part of our lives again.

This approach is quite bold and may surprise and irritate Jane Austen’s fans. Honestly, it appears quite condescending to me, implying that our Jane needs a make-over to be accessible to a new generation of viewers. Well fine. But do they have to be so superior about it calling her characters snooty and all? In Austen’s defense Judith Hawley, a professor of English at Royal Holloway University responded that this modern take on Austen’s Emma sounded like as a "strange kind of hybrid Austen".

This business of changing the sensibility seems like a mistake…If you modernise it too far and modernise the social relations that pertained to Austen's day, then some of the behaviour and the plot will not make sense.

My point exactly. This Byronization of the relationships may change the subtle and delicate balance that Austen is known and appreciate for. The producers may be attempting to forestall reproof to soften the shock – but the changes may still be a disappointment to many. We shall see what the miniseries bears. The jury is still out on this one.

I'm excited to see a new version of Emma, but am also slightly concerned. I don't know why you would ever need to change Austen.

This should be interesting. Am always curious to see a new version of a good work, as long as they maintain the core relationships, personalities, and social structure of the original work.

Interesting point. I agree with you. But let's wait and see. It'll be nice to discuss our impressions on our blogs after.

Yes, Laurel Ann, I have the same concerns about this production - it all lost me really when Richard Armitage was not to be Knightley! -

But this BBC explanation certainly explains that scene in the previews of Emma sobbing to Knightley about not being able to marry him [I am assuming that this is about her not being able to leave her father and therefore AFTER the proposal scene? - yikes! I hope so!]... but as for modernizing, I also feel that if it gets yet another generation to go back to the books, then it is a good thing [and the costumes do look lovely!]

I agree with Maria - I look forward to the discussion on all our blogs!...

Thanks for the update,
Deb

Will it fall into the same pile of ridiculous as "Lost in Austen" did? I won't even mention Mansfield Park with Billie Piper...

Leave it to the British...they come up with most of the good ideas for T.V. shows that us Americans then copy...but I am dismayed with tampering with Austen and I also present "Lost in Austen" and "Mansfield Park" with Billie Piper as proof of my grave concerns.

MP with Billie Piper may become the benchmark for comparisons of good Austen adaptations or outrageous re-interpretations. There were things I liked about it, but sadly, they were not outweighed by the things I did not.


This new production of Emma has a lot going for it to make it great. I am keeping my fingers crossed.

LOVE Jonny Lee Miller! Can't wait to see this one. It will be interesting to see how this updating plays. I say, why fix what isn't broken?!

Oh dear..... After reading this, I'm afraid I fall into the skeptics corner. I will watch and see as well.

I find their reasoning rather bizarre when the last ten years of Jane Austen adaptations haven't had millions of people screaming how stodgy and snooty the characters were. This is simply another attempt to dumb down the world, and makes me irritated that Hollywood/BBC will dumb down a classic because it's a "sure thing" rather than creating their own interpretations of romance, wit and life, in a historical era.