Where Exactly Did Louisa Musgrove Fall?

When Alfred Tennyson visited Lyme Regis his friends wanted to show where in his rebellion in the 17th century, Monmouth had landed. But Lord Tennyson just wanted to know exactly where Louisa Musgrove had fallen:

"Don’t talk to me of the Duke of Monmouth; show me the exact spot where Louis[a] Musgrove fell."

To answer that question let's see what Jane Austen told us about Louisa's fall in Persuasion:

There was too much wind to make the high part of the new Cobb pleasant for the ladies, and they agreed to get down the steps to the lower, and all were contented to pass quietly and carefully down the steep flight, excepting Louisa; she must be jumped down them by Captain Wentworth. In all their walks, he had had to jump her from the stiles; the sensation was delightful to her. The hardness of the pavement for her feet, made him less willing upon the present occasion; he did it, however. She was safely down, and instantly, to show her enjoyment, ran up the steps to be jumped down again. He advised her against it, thought the jar too great; but no, he reasoned and talked in vain, she smiled and said, “I am determined I will:” he put out his hands; she was too precipitate by half a second, she fell on the pavement on the Lower Cobb, and was taken up lifeless! - Chapter 12

In the picture below we see the three movies with three versions of the different staircases. 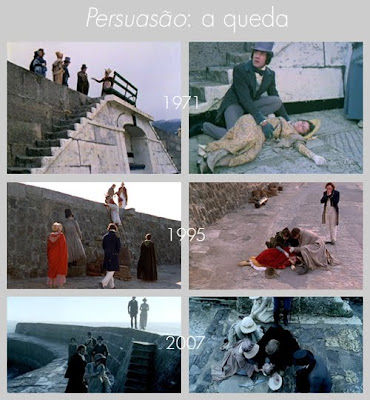 Persuasion, the Fall – 1971, 1995 & 2007
When I read Persuasion for the first time I imagined a plain staircase and had no any idea of the shape of the Cobb. Finally, when I watched the 1995 and 2007 films I realized that the stairs were different, but certainly in the same place. The first, very rough, was made of steps embedded in the wall. The second wee finished in cement. I considered that the old staircase had been cemented at the time of filming in 2007, but then I realized that the steps were different and their positions were opposed. 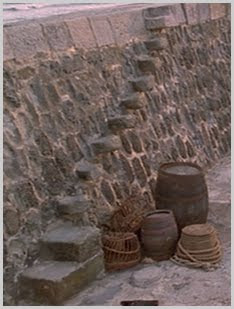 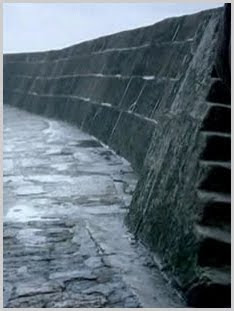 Staircases - 1995 & 2007
Watching 1971's version, I saw the double staircase with woods in the background. I thought sincerely that they had filmed the scene in another place than the Cobb! I only believed that the locations were authentic when I discovered the Lyme Regis Pearl of Dorset's site and its webcam. 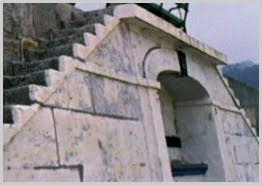 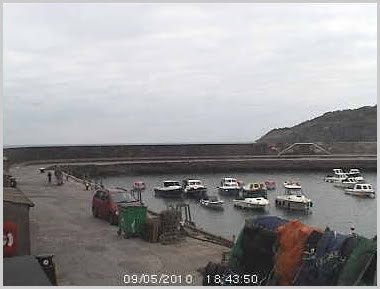 Lyme Regis webcam screen shot
Now I changed the original question to: "From which of these three staircases did Louisa Musgrove fall?"

I believe I have found the answer in the book Jane Austen: Her Homes and Her Friends**, written by Constance Hill and illustrated by Ellen G. Hill (circa 1900), where the author describes her visit to Lyme Regis:

The Cobb lies on the further side of the harbour. It is a massive, semi-circular stone pier upon which are two broad causeways, on different levels, forming the Upper and the Lower Cobb. It has undergone many a repair since Miss Austen walked upon it in 1804 but, nevertheless, a considerable part of the old masonry still exists, which is marked by rough-hewn stones placed vertically. Against some of this old masonry, and about half way along the Cobb, are to be seen the identical “steep flight of steps” where the memorable scene of the accident in “Persuasion” is laid. [...]
The steps in question are formed of rough blocks of stone which project like the teeth of a rakefrom the wall behind. We can ourselves bear witness to the “hardness of the pavement” below, which Captain Wentworth feared would cause “too great a jar” when he urged the young lady to desist from the fatal leap. 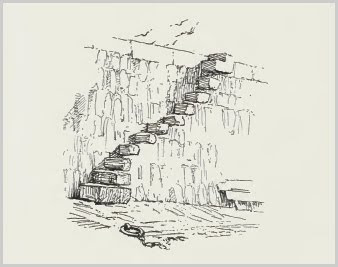 I must say, she looked quite dead in 1971...
Great post thanks for putting it all together! I always found 'the fall' stood out to me in the book. When I saw the recent film, I blinked and missed the fall!

I had no idea there were 3 Persuasions. Or three stairs on the Cobb. I must find the movie.

I admire your attention to detail! Honestly I don't care too much about Lousia Musgrove, a silly girl. I'd rather look at Captain Wentworth.

Wow! Thanks for that. What an awesome slice out of Austen life :) And wow, were those steps narrow!

The double staircase was built in 1826, after Jane died. The original stairs were the teeth like ones. In the recess under the double staircase there is a plaque explaining that the cobb was partly rebulit and repaired by the Royal Engineers Regiment in 1826.
All the best,
Tony

Lauren,
I believe the 1971's version of this scene could be a suicide attempt after Louisa having met Captain Benwick :

What do you think?

Oh yes, the woods in the background behind The Cobb are the woods that Sarah Woodruff (aka the French Lieutenants Woman)took solitary walks in. It is also known as The Undercliff. It's like walking through a South American Rainforest. It has it's own climate.
John Fowles lived in Lyme.

Enid,
I agree with you. Poor captain bear this girl always jumping in his arms... or neck... Insufferable creature!

very narrow, and I think dangerous in a rainy day, as 2007 version of Persuasion.

The Undercliff like a rainforest I never could imagine that!
Thank you for this precious hints, about the staircases. May I publish it at my post?

Raquel, of course you can. No problem.
I've been to Lyme a few times.Not only is it famous for Jane Austen and John Fowles it is also a fossil hunters paradise. Lyme is the place where Mary Anning lived.She found the remains of the first ichthyosaur. Some of her finds are in The Natural History Museum in Kensington.

The undercliffe is a special place to walk in, by the way.

Just a thought Raquel. I have quite a few photographs of myself and friends on the Cobb in rather stormy weather.A little like the scene in The French Lieutenants Woman, except there were five of us nearly blown into The Channel. They show two sets of the stairs.
If you would like, them I'll post them on my BLOG.
All the best,
Tony

Oh this is GREAT!! I lurve seeing all the side by side shots together. I too have often wondered what placement the stairs were at too!!

You will find, if you research adequately, that the third set are the right ones.

Indeed, we went on Natalie's tour just last week. Read again: "There was too much wind to make the high part of the new Cobb pleasant for the ladies".

The 'Witches Teeth' staircase which you indicate as being the ones are in the old Cobb section. The third set of stair are situated right after you leave the old Cobb and start on the new part.

Did you find any further evidence re third set of steps on the Cobb, as I suggested back in May?

Thanks to the Anonymous (whoever you are) who went on my tour - you were obviously listening! Hope you're all enjoying Austen still.