Darcy and Fitzwilliam by Karen Wasylowski: A Review 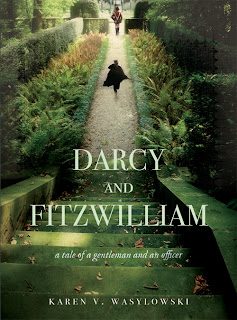 Book review from the desk of Shelley DeWees… Darcy and Fitzwilliam: A Tale of a Gentleman and an Officer by Karen V. Wasylowski

Imagine, if you dare…

A soldier stands in the background, far away from the shaded beauty of the stairs directly below you. You can barely see the red-backed, leather-booted militia man but you can tell he walks with purpose, conviction. He’s looking to the right as if he’s about to turn into the lane and boldly move off into the next phase of life with his head held high, confident in his poise and precise in his footfalls. The beautiful spring day is made better by the vision of sun dappled ferns and leaves scattered haphazardly on the stones, billowing around as if they’ve just been disturbed by something….a man….a cloaked man, running after the soldier with a clear demeanor of distress. He runs as if he’s got something to say, something important.

Mysterious. Intriguing, you might say. Gracing the cover of Darcy and Fitzwilliam, Karen Wasylowski’s debut novel, the scene seems to speak, “Yes. Open me. Read me. It will prove interesting.” My senses were tingling, but guardedly. It was going to be a compelling tale of male bonding and growth, perhaps interspersed with a few allegories of debauchery and decadence. Was I about to stumble into a literary man cave? A wordy representation of a place where no female ought to poke her nose? Though the contemptible word “bromance” was used in the author’s own description of her work, her “baby” as she called it, I was moved to give the whole liking it thing a real shot, a good ‘ol college try. With such a lovely cover, it had to be better than a bromance, right? Would a sneaky look into a man cave be that bad?

Well, no. This story is amazing. It’s not just a glimpse into the idle lives of the extremely rich and entitled, and certainly not a flippant narrative of a life unbridled by the constraints of the middle class. It’s not just drinking and billiards, gambling and shooting, and it’s certainly not what I thought it would be (the man cave analogy is officially rebuked). This is a visceral tale that positively drips with social commentary, tackling problems that few Austenesque writers would attempt to undertake.

Ms. Wasylowski weaves a brilliant account of two separate lives, those of a married, measured, quiet man whose strength is in the details, and another loud, energetic, sometimes irksome chronic bachelor who uses his charisma to get what he needs out of life. I’m sure you know which is which, but I bet you’ll be surprised at just how engaging these two characters are. The book itself is divided into two volumes, the first of which deals with Mr. Darcy and his new bride. They’re happy but not irritatingly so (how refreshing), and in fact they engage in a knock-down-drag-out brawl within the first seven chapters! Elizabeth and Darcy slowly figure out their new life together, discovering flaws, faults, one giant secret, and stirring up all kinds of interesting social issues in the meantime. Sexual disparities show up, and Elizabeth marvels at her ignorance and jealously while Darcy is forced to deal with the formidable Lady Catherine DeBourgh (who, in this representation, is a feisty and delicious character). Later on in volume two, the life of Fitzwilliam “Richard” Darcy is explored more thoroughly, and the reader watches helplessly as his greed and foolishness finally catch up with him. What is he to do? Searching for answers at the bottom of a hip flask hasn’t been working out. He’s looking to find someone to spend his life with, but is forced to sift through piles of societal restrictions once he’s found her. England’s position on women, marriage, homosexuality, alcohol, even America’s treachery come into the picture, not tiptoeing over but literally smashing his dreams. What’s a guy to do?

There is little else anyone can say to you, clever reader, except this: Read this book. A cutesy romance of love and lace it is not. Darcy and Fitzwilliam is a gripping interpretation of life in Regency England, bravely attempting to bring issues of tension to the table. Domestic violence, alcoholism, harsh words, sex, royalism, and loathsome small-mindedness abound, and all through the vision of Jane Austen’s characters.

Gentle readers, This is Shelley DeWees's fifth book review for me and the second for Jane Austen Today. (She has also reviewed for my other blog, Jane Austen's World.) Shelley also oversees her own blog, The Uprising, which features vegan recipes. Yum. She lives in the northern U.S. I shiver just thinking about the cold.- Vic
at 2/07/2011

I've read a not great review of this book, but yours made me change my mind. While you like its gritty quality, the other reviewer didn't. Thank you for a thoughtful review. You are an excellent writer.

Thanks very much, Nancy! I too have read less-than-great reviews of the book. I suppose the difference of opinion has a lot to do with how one wishes to view Jane Austen's fabulous characters...whether through a lens of beauty and perfect manners, or through one of reality, with all it's misfortunes and truths. I think both approaches have merit! Karen Wasylowski chose the latter path, and though it might be disagreeable to look at the Darcy clan in such a stark light, in my opinion she truly succeeded. I encourage you to give it a shot! You won't be disappointed!

Thank you so much for this wonderful review. You understood! It means the world to me. I know some of the blogs have been horrified but I didn't mean to offend; I just thought the stories should grow up a little. Darcy and Lizzy love each other but a marriage has to grow. And, Nancy I hope you try the book, I love these characters like my own children - I would never disrespect them.

Sounds like an intriguing take on the male POV. I wonder how much the military side of things comes into it...

It always interests me to see the wiled variety writers create in these sequels. I like the idea of strong-willed Elizabeth and Fitzwilliam Darcy struggling with what their marriage will be. They barely knew each other and with their forceful personalities, there are bound to be fireworks. I am sorry that Col FItzwilliam, who acts with such friendly courtesy in P&P, falls into the 'second son' trap. I rather liked him and am sorry that he turns out to be a rakehell.

I am really looking forward to reading this book. I am fortunate in that I have not read any other reviews but this one intrigued me. I enjoy reading books that don’t put the rose colored glasses on things. I love Jane Austen and the Regency era but I want to be able to also read what life was really like. I will try to remember to come back and let you know what I thought.