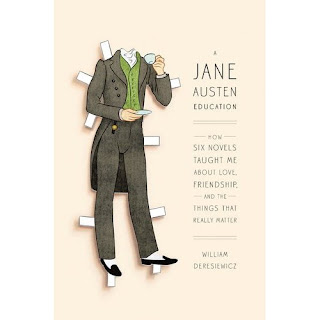 Gentle Readers, for several years my blogs have covered Jane Austen from the male perspective. Most recently, Tony Grant wrote about Sense and Sensibility's two hundred year anniversary and how he discovered Jane Austen. Several years ago, Laurel Ann and I reviewed Two Guys Read Jane Austen, and I wrote a blog post, Men Reading Jane Austen. A new book, A Jane Austen Education, by William Deresiewicz is about the be released. In modern parlance, it's raining men in the JA community! Here's an interview with Mr. Deresiewicz on Amazon.com:

Q: Can you describe your initial resistance, as a young graduate student, to reading Jane Austen?

A: Like a lot of men, I thought Austen was chick lit: soap-opera romance, fluffy and boring. When a friend of mine heard I was writing this book, he said “I expect a lot of sex and dating advice.” It was an understandable assumption, and my friend’s, no doubt, was based on all those movies—the ones with the beautiful gowns, and the beautiful homes, and the beautiful actresses. The ones with all the swoony music and the lush, romantic lighting, the ones that leave out everything that Austen had to say to us except the love—and then, don’t even get the love part right.

Q: What most surprised you about yourself once you discovered Austen's novels and started examining your own life?

A: If you had told me, when I was eighteen or twenty or twenty-five, that the most important writer I would ever come across would be Jane Austen, I would have said you were crazy. Why should half a dozen novels about provincial young English ladies, published in the 1810s, make any difference whatsoever to a Jewish kid in New York in the 1990s? But I learned that books aren’t written by groups, and they don’t belong to groups. They’re written by individuals, speaking to individuals, and they belong to anyone who loves them.

What was Austen saying to me? Well, first of all, what an idiot I had been about so many things--about pretty much everything to do with relationships. And that I had so much to learn from seeing things from a woman's point of view. But most of all, finally, I think, that I didn't have to be afraid to learn things about myself--didn't have to be afraid, in other words, to be wrong. Aside from all the specific lessons, I think the largest message was simply that I no longer had to be so armored, so defended, so defensive. And that's made it easier to admit mistakes and be vulnerable and keep on growing.

Q: Is that when you came up with the book’s subtitle, How Six Novels Taught Me about Love, Friendship, and the Things that Really Matter?

A: Well, a while ago, I was interviewing for a job as an English professor. At the very end, the head of the hiring committee posed a question that she must have been dying to ask me the whole time. Glancing down at my resume—I had written my doctoral dissertation on The Novel of Community from Austen to Modernism, published a book entitled Jane Austen and the Romantic Poets, and was planning a study called Friendship: A Cultural History from Jane Austen to Jennifer Aniston—she asked, “So what’s with you and Jane Austen?”

I wanted to give [the dean] her a good answer. But how do you explain your deepest attachments? I tried to muster an intellectually sophisticated response, something about the purity of Austen’s prose or the brilliance of her satire, but it didn’t feel right, and besides, I’d already given enough answers like that. Finally, I just blurted something that I’d already been telling myself for a long time. “Well,” I said, “sometimes I feel like everything I know about life I learned by reading Jane Austen.”

There is so much to learn from Austen. My favorite Elizabeth Bennet has been a great model in patience and politeness. I love her reactions to Mr. Collins and Catherine deBourg.