Royal Weddings by Emily Brand: A Review and Poll 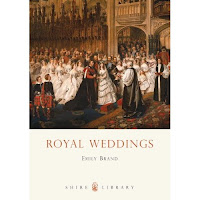 It is a fact not universally known that Westminster Abbey became the regular setting for royal British weddings in 1919 and 1922, when Princess Patricia of Connaught (granddaughter of Queen Victoria) and Lady Elizabeth Bowes-Lyon were respectively married to commoner Alexander Ramsay and the future King George VI. The enormous interior of that magnificent edifice allowed the two couples to invite an impressive number of guests to witness their nuptials.
Young Queen Victoria settled on the more traditional but cramped setting of St. James's Palace, since prior to the 20th century, royal weddings were consider private affairs.
In a few weeks, Westminster Abbey will host a royal wedding for the 38th time. Royal wedding fever has gripped the world, as evidenced by the proliferating number of merchants seeking to make a profit with souvenirs of questionable taste. These tacky tchotchkes have been around for a long time - as early as 1625, when profile portraits of Charles I and Henrietta Maria were set on tokens to commemorate their wedding.
In honor of Will's and Kate's most splendid (and expensive) occasion on April 29th, Shire Library has released Royal Weddings by Emily Brand. This short but tasteful, 56-page book is crammed with useful information and images (some quite rare) that explain the evolution of royal marriages from those that united the children of Britain's ruling families for princely gain, not personal satisfaction – to the modern era, where quite a few personal choices based on love led disastrously to divorce.
Emily Brand is a writer and historian with a special interest in eighteenth- and nineteenth-century England. In Royal Weddings she chronicles the pomp and splendour of royal marriages since 1066 in a slim and sleek 56 page book that is generously enhanced with 60 full-color pieces of rare art and images of elaborate decorations, feasts and wedding cakes; ornate jewelry; commemorative medallions; evolving wedding fashions; marriage announcements; and menu card. Many juicy historical tidbits are sprinkled throughout the book, but for the sake of brevity, I shall concentrate on trivia from the Georgian era:
While Charlotte of Mecklenburg-Strelitz was far from attractive, George III remained loyal to her and did not take a mistress for the entirety of their marriage. Alehouses advertised Mecklenburg purl and Coronation porter in honor of the event.
The Prince Regent (future George IV) was quite drunk during the marriage ceremony, and had to be supported as he walked down the aisle. Despising his bride, Princess Caroline of Mecklenburg, on sight, he spent his wedding night inebriated and unconscious. Nevertheless, he performed his duty early, for nine months later, Caroline gave birth to their only child, Princess Charlotte.He was never to enter their marital bed again. The above cartoon depicts the lack of privacy royals enjoyed on their wedding night.
Princess Charlotte managed to be happy in her marriage to Prince Leopold, but their wedded bliss lasted less than two years when she died in agony giving birth to a stillborn son. Her death sparked a flurry of weddings in which the King's bachelor brothers married in hopes of producing an heir. While King George III and Queen Charlotte were prolific, their fifteen children were not. It was the Duke of Kent's daugher, Victoria, who would ascend to the throne. 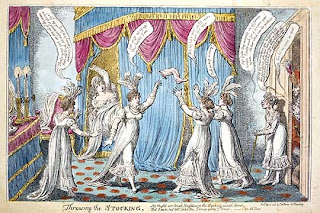 "The cartoon above shows Princess Charlotteon her wedding night in her bed, throwing her stocking to the four old maid aunts (the daughters of George III). Her husband, Prince Leopold of Saxe-Coburg, is impatiently peeping round the door. The depicted aunts were kept unmarried first by their father, then by their mother to buffer her from their father in his "madness". Kew Palace became renowned for being home to these sisters, unmarried against their will." - From Culture 24 - Exhibit at Kew Palace

I must admit that I thoroughly enjoyed reading this book and recommend it to anyone who has been smitten with Royal Wedding fever. Order the book here from Random House.
My question to you, gentle reader, is this: “Will you be one of the one billion people to watch the nuptials on television?”
More on the topic: 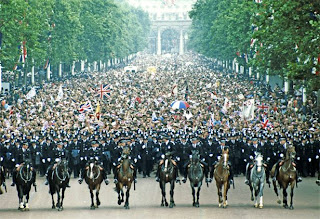 Yes !!! I have heard of people giving parties in honor of the wedding and watching as a group !

Oh to be in England, now that spring is here, eh?!

Royal Doulton has made a magnificent Limited Edition figurine of Queen Victoria and Prince Albert's wedding. See it at www.GrandDezign.com