Travel During the Regency Period 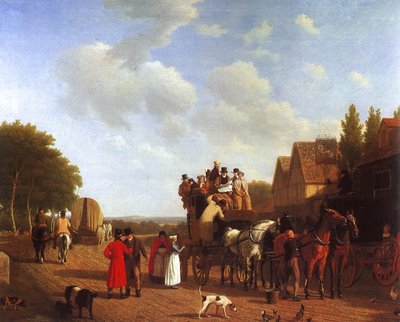 When Sir Richard, The Corinthian in Georgett Heyer's novel of the same name, escorts his young charge, Pen, to her childhood home, he is boxed inside a public carriage with an assemblage of memorable characters. Jane and Georgette refer to Postillions as a matter of course whenever their heroes and heroines travel. I found the following definition from a public British site:

"In practice the Postillion was the man with spare horses held in a stable by the difficult spots in the road, to help speed the mail and passenger coaches on their way. This would generally develop into a break-point in the journey for the driver and passengers to pause on their journey, eat, refresh themselves etc. Over time this would develop into a Coaching Inn, Services."

For more details about public travel, click on this link to the History of Coaching, from the Regency Collection.

For more about the conditions of England's roads during this era, click on Coaching Days and Road Engineers by J. B. Calvert.

Carriages in Regency and Victorian Times includes a detailed description of the vehicles in an article by Ellen Micheletti.

This link to the Hackney Horse Society includes a short historical description.

Question:
I am setting a novel in 1784 England. My lead character is to take a hackney coach from London to Yorkshire in June. I am hoping to find out how long this trip would take and what towns she would pass through. Thanks for your help.

Answer:
1784 was just before the highly improved mail coaches were introduced on the main routes across Great Britain. They cut travelling times by nearly half. The London-York route in 1784 would have taken about three days, leaving London early on the first day and arriving in York late on the third day about 60 hours later. Overnight stops would have been made at such towns as Royston, Grantham or Doncaster depending on the distance travelled. By the 1780s roads had improved thus allowing for a quicker journey, but this was offset by the fact that the improvements in the roads were paid for by turnpikes. These basically were tollgates on selected turnpike roads which every vehicle had to stop at and pay a toll for the upkeep of the road, so journey times were lengthened by stopping at these turnpikes. Horses were changed every ten miles or so and there were lunch stops, so the journey was far from smooth, there were many stops along the way. If you had set your novel a few years later then the mail coaches would have been running on the Great North Road from 1788. These were faster carriages that passed straight through the turnpikes without stopping by paying the toll in advance and sounding the posthorn to warn the turnpike keeper to open the gate to let the carriage through. The same journey in 1788 took about 40 hours with one overnight stop. You could mention such towns as Huntingdon, Stamford, Newark and Pontefract in addition to those already mentioned.My home town was a coaching town on the London-Liverpool and London-Holyhead (for ferries to Ireland) routes. The old coaching inn is still standing. If your character ever travels that route I can give you the name of the landlord in the 1780s for extra authenticity! Mark Smith, All Experts
at 8/28/2006