As Mother’s Day approaches, one's thoughts turn to Cassandra Leigh Austen, Jane’s mother (1739-1827). In reading the dry biographies that are written about her, I asked the question:

By all accounts, she lived a life that was representative of the gentry and a woman’s married status, that of wife, mistress of the household, and in charge of children and servants. She had a reputation of running an economical household, but she was also witty and lively, and much loved by her quieter, more scholarly husband, George. She gave birth to eight children, all of whom survived, a miracle for those times. Later in life her health deteriorated and the family moved to Bath, known for its restorative waters.
I found one colorful description of Jane’s mother by a student who was taking a Jane Austen course. She described finding and testing some old recipes for the class’ gala ball:

"Jane Austen's mother, for example, wrote out the recipes, but she did it in a very poetic way, so she'd make a poem about how to make pound cake," said Jess Gunraj, a junior. "I think the main difficulty in making the recipes was just how to write it out so that anyone who picked up a recipe card would be able to figure out how to make this."
From An Evening With Jane Austen, Portland Press Herald, Maine Sunday Telegram, 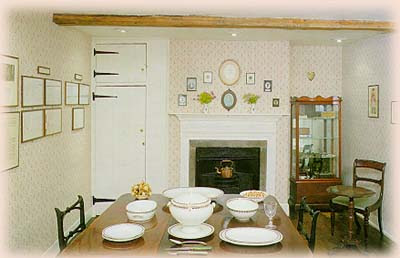 Chawton House Dining Parlor
Here is a description of her mother in Jane’s letter to Cassandra in 1798:

“You have already heard from Daniel, I conclude, in what excellent time we reached and quitted Sittingbourne, and how very well my mother bore her journey thither. I am now able to send you a continuation of the same good account of her. She was very little fatigued on her arrival at this place, has been refreshed by a comfortable dinner, and now seems quite stout. It wanted five minutes of twelve when we left Sittingbourne, from whence we had a famous pair of horses, which took us to Rochester in an hour and a quarter; the postboy seemed determined to show my mother that Kentish drivers were not always tedious, and really drove as fast as Cax.

Our next stage was not quite so expeditiously performed; the road was heavy and our horses very indifferent. However, we were in such good time, and my mother bore her journey so well, that expedition was of little importance to us; and as it was, we were very little more than two hours and a half coming hither, and it was scarcely past four when we stopped at the inn. My mother took some of her bitters at Ospringe, and some more at Rochester, and she ate some bread several times.”

The bitters confirm Cassandra’s poor health. According to Wikipedia, bitters is a type of British ale with an alcoholic content of up to 45%. In Jane’s day, this restorative, prepared with herbs and citrus and dissolved in alcohol, was used as a patent medicine or digestif. It was ingested in small quantities (or one would hope.)

Later in the letter, Jane makes the observation, “My father is now reading the "Midnight Bell," which he has got from the library, and mother sitting by the fire.”

The scene is one of domestic bliss, and echoes the many biographies that exist about Jane’s life, which describe a happy childhood with parents who loved their children and each other. Though in poor health even while Jane was alive, Cassandra Leigh Austen outlived her daughter by ten years. You can visit her grave near Chawton Church, where she lies besides her daughter, Cassandra Elizabeth. 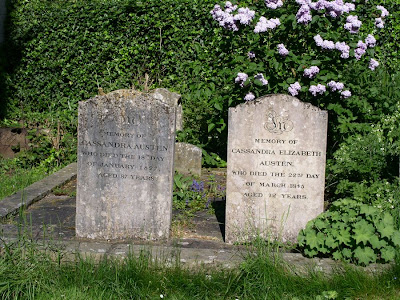 For biographies about Jane's life, click on the following links: