In 1941, Vivien Leigh (Scarlet) and Laurence Olivier (Mr. Darcy) starred in That Hamilton Woman, a film directed by Alexander Korda about the mistress of Vice Admiral Lord Nelson, who died in the Battle of Trafalgar in 1805. 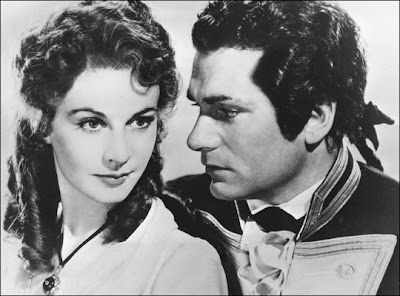 Vivien was filmed in the poses of George Romney's portraits of the real Emma, which, along with her reputation as the mistress of a powerful man, made her famous. I found these side by side images of Vivien and Emma by Jean-Pierre Gueroult on Flickr. 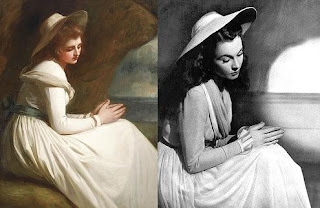 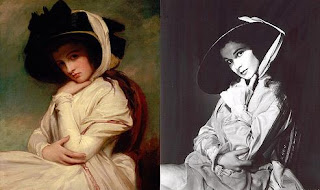 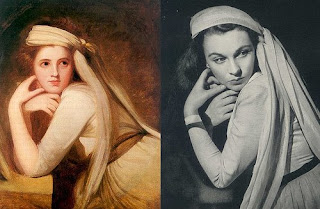 Thanks for these links. I was not familiar with Emma's story or the film. And I loved seeing the comparision between the paintings and the Vivien Leigh film poses! Very well done!

It seems Emma Hamilton was good at looking demure; Vivien, not so much. :-) It's funny to see the similarity of pose and the difference in facial expression.

Likely neither of them would be considered a beauty in the other's respective époque.

I saw this movie a few months ago and it was wonderful but contrived, kind of like the version of "P & P" with Olivier and Garson.

Paintings in Lady Hamilton's day were often made more attractive than the actual person.

I have always thought Vivien Leigh was beautiful but tortured throughout her career ( mental illness, aging, dwindling roles and alcoholism etc. ) along putting up with the talented but impossible Sir Laurence !

Oh Vic, you have chosen one of my three fav classic movies. I had a copy of it in VHS, but it is not on DVD yet, so I have not seen it again recently until you directed me to YouTube. Thanks! This time, I watched the movie with a more educated eye tword Regency fashion and decorating and was quite surprised at the unauthentic clothing and hairstyles for Miss Leigh. This movie was made in 1941 after Gone With The Wind, and I swear that they resurrected some of the same hairstyles and costumes for Vivien! Hollywwod was not really concerned with staying true to era in those days. The audience was less knowlegdable than we are. ;-) My fondest wish is that the BBC will do a miniseries on Nelson and Emma, but I may have to wait a long time since they they will not be producing anymore bonnet dramas after the upcoming adaptation of Emma. *Sigh* Such a loss. If you choose to write about my two other fav classic movies, Waterloo Bridge and I know Where I am Going, I will be over the moon. Thanks for the reminding me how much I enjoy this movie!

One of my favorite, favorite films. It was made all the better in knowing that Vivien Leigh and Laurence Olivier were in love in real life. :-)

Oh I love Emma! I've wanted to see the film for some time, thanks for the link :)

I love it ! Very creative ! That's actually really cool Thanks.