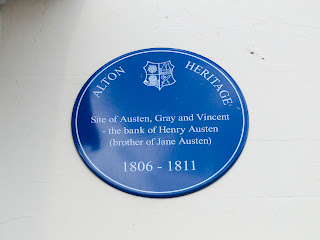 Claire Tomlin writes in her biography, “Jane Austen, A life,”about certain disasters, befalling the Austen family in the years following the battle of Waterloo that took place on the18th June 1815.
Henry Austen, Jane Austen's brother, had his banking crisis and one can imagine this being replicated to a lesser or greater extent with other banks in London, England and in Europe. War blows a hole in the economic markets in any century. 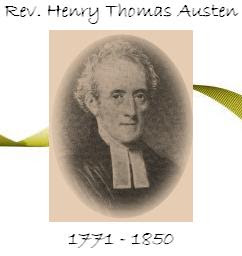 “At the end of 1815,however,the Alton branch of the bank failed; and on the 15th March the other branches, the London bank and the army agency all crashed. They were casualties either of the general economic trouble of the post war period or the particular untrustworthiness of some of the clients; probably a mixture of the two, with Henry’s too ready optimism another factor.” 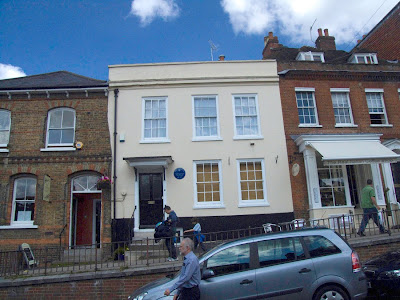 Henry Austen's Bank in Alton
You can see the bankers of today, those who run The bank of England and The Federal Reserve snugly fitting this scenario almost hauntingly exactly. ,” the particular untrustworthiness of some clients.” Isn’t that the sub prime market? “Henry’s too ready optimism another factor.” Well, isn’t that the same for our bankers today? Here is a quote from the Wikapaedia article that describes the world economic banking crisis “ Lehman Brothers was liquidated, Bear Stearns and Merrill Lynch were sold at fire-sale prices, and Goldman Sachs and Morgan Stanley became commercial banks.” They are all in the good company of Henry Austen’s bank in Chawton. Things certainly come around. 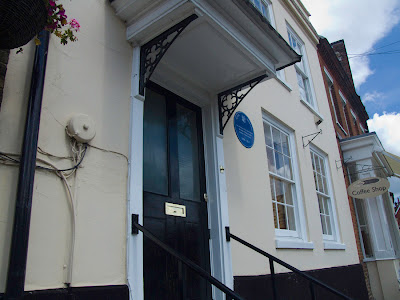 The bank's front door
Henry’s brother Edward had guaranteed him for large sums of money, £10,000 and £20,000. His other brothers, Frank and James both lost smaller amounts and Jane herself lost the £13 profit she had made from Mansfield Park. The brothers were now unable to keep their promise of providing Jane, Cassandra and their mother with the £50 from each per annum, to help their mother and sisters with their finances. The whole family hit straightened times. 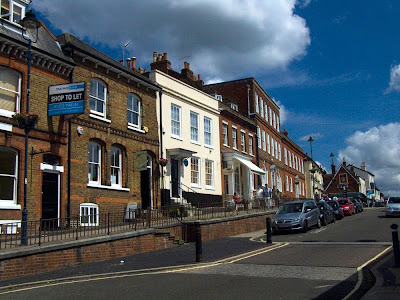 Alton High Street with Henry's Bank
In a letter to her publisher John Murray on the 1st April 1816 Jane writes,

“ In consequence of the late sad Event in Henrietta St – I must request that if you should at any time have anything to communicate by letter, you will be so good as to write by the post, directing to me ( Miss J. Austen) Chawton near Alton – and for anything of a larger bulk, you will add to the same direction, by Collier’s Southampton Coach. –
I remain, dear sir,
Yours very faithfully
J. Austen” 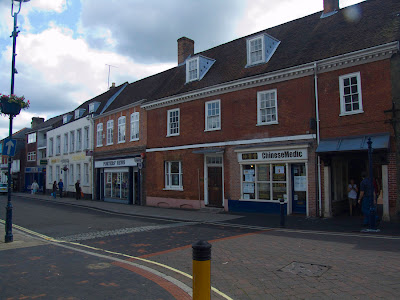 18th Century Alton Shops
Henry had to give up his houses in Henrietta Street and Hans Place. There were going to be no more visits to London and the theatre. 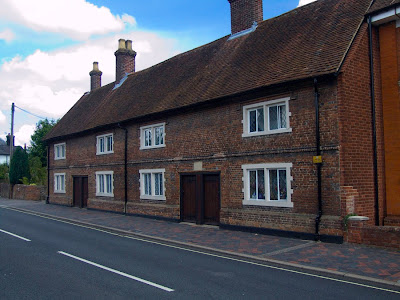 Alton cottages
But, they got by and they came through it.

Lets hope the world today can get by and come through it. I’m sure we will. We are in the good company of Jane Austen in this very respect. 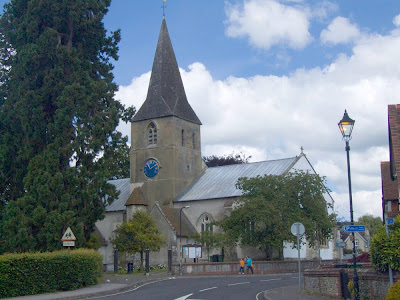 I had no idea that Henry was a banker. I knew he was a minister and that he supported Jane's work by negotiating with her publishers.

Thank you again for the photographs, which make your posts special.

Great photos and commentary !
I love it that the family rallied around and helped each other whenever they could...and when they couldn't,they all adjusted to their lack of good situation and made the best of difficult times.We could learn some lessons from the Austen family and apply them to our time too !

Thank you Becca and thank you Nonna.

PS Frugal times, well at least less wasteful times and that can only be good thing, I think.