Antonin Careme, 1784 - 1833, was regarded the world's first celebrity chef, and was credited for creating haute cuisine for the kings and queens of Europe. He made Napoleon's wedding cake, souffles flecked with gold for the Rothschilds in Paris, and meals for the Romanovs in Russia using such esoteric ingredients as rooster testicles. On January 15, 1817, Antonin supervised the meal served at Brighton Pavilion for the Prince Regent, which included over 100 dishes.

At the Pavilion, and in other grand households, dinner was still served a la fracaise, which meant that the majority of the dishes were arranged in the middle of the table: the people were supposed to help themselves from the nearest dish and then offer it to their neighbours. If, however, someone fancied one of the other dishes, which might well have been placed at the opposite end of the table, he had to ask a fellow guest within range, or one of the servants, to pass it. It was therefore impossible to sustain a conversation because someone was always interrupting and the servants were always on the move. (p. 182-83)

The chances of the Prince Regent's guests getting the exact dishes they wanted on the menu would not have been great. At best they would have received a random sampling of such dishes as: 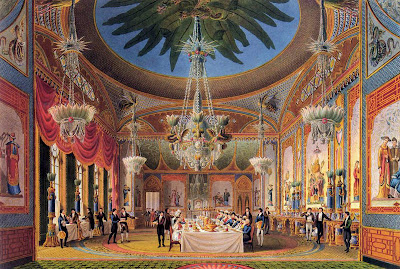 Crumb a whole French loaf. Add two spoonfuls of poultry jelly, one of veloute, one tablespoon of chopped parsley, two of mushrooms, chopped. Boil and stir as it thickens to a ball. Add two egg yolks. Pound the flesh of two boned chickens through a sieve. Boil two calves' udders -- once cold, pound and pass through a sieve.

Then, mix six ounces of the breadcrumbs panada to ten ounces of the chicken meat, and ten of the calves' udders and combine and pound for 15 minutes. Add five drams of salt, some nutmeg and the yolks of two more eggs and a spoonful of cold veloute or bechamel. Pound for a further ten minutes. Test by poaching a ball in boiling water -- it should form soft, smooth balls.

Make some balls of poultry forcemeat in small coffee spoons, dip them in jelly broth and after draining on a napkin, place them regularly in the vol-au-vent, already half filled with:

Cover all with an extra thick sauce Allemande.

Email ThisBlogThis!Share to TwitterShare to FacebookShare to Pinterest
Labels: Antonin Careme, Banquet at Brighton, dining in the Regency Era, meals during the Regency Era

I love to cook, so this is a very interesting post!

Ah, I heard about him. At the end of that meal, didn't the Prince Regent invite his guests to take up arms and shoot at the Nash-designed gilded ceiling ornaments in the room...?

I'm going to have to study up on Regency recipes, because I'd like to have a full regency buffet for the ORS annual ball this year.

Stephanie, I believe the book is filled with recipes. You can also view a couple on the NPR site.

James, I am not sure. But that would be an interesting tid bit to hunt up. You are full of fabulous information!