The Marriage Act of 1753 made it increasingly difficult for upper class men to "marry down," and for women to marry men outside their rank. In fact, the Act stipulated that:

Marriage must take place with banns and an officially purchased marriage license (the banns being read publicly in church three consecutive Sundays prior to the wedding), the two parties must receive parental permission if under age (under 21), the wedding must be recorded in the Marriage Register with the signatures of both parties, witnesses, and the minister, and it must occur before witnesses and an authorized clergyman. (From The English Bride: Legal Advice.)

Mary Darby Robinson was a beautiful actress who came from a humble background, and who in her acting heyday moved among elite circles, including the Prince Regent's set. She received her first proposal at thirteen, but in 1774 she married Thomas Robinson, a gambler and a wastrel who pretended to come from a good family. Mary's sad account of her arranged marriage is typical, in that so many brides of her era scarcely knew the men they married. In fact, any a young woman in her situation must have felt as bewildered and unhappy as Mary did. 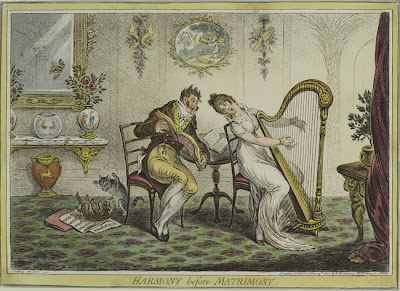 Harmony Before Matrimony by James Gillray

By the time Mary's family discovered Tom had lied, she had become pregnant. The following excerpt is her account of their wedding in her Memoir, published posthumously in 1801. From it you get a real sense of what the 'duties' of a bride mean and that Mary barely knew her husband.

As soon as the day of my wedding was fixed, it was deemed necessary that a total revolution should take place in my external appearance. I had till that period worn the habit of a child, and the dress of a woman so suddenly assumed sat rather awkwardly upon me. Still, so juvenile was my appearance, that even two years after my union with Mr. Robinson I was always accosted with the appellation of Miss whenever I entered a shop or was in company with strangers. My manners were no less childish than my appearance; only three months before I became a wife I had dressed a doll, and such was my dislike to the idea of a matrimonial alliance that the only circumstance which induced me to marry was that of being still permitted to reside with my mother, and to live separated, at least for some time, from my husband.

My heart, even when I knelt at the altar, was as free from any tender impression as it had been at the moment of my birth. I knew not the sensation of any sentiment beyond that of esteem; love was still a stranger to my bosom. I had never, then, seen the being who was destined to inspire a thought which might influence my fancy or excite an interest in my mind, and I well remember that even while I was pronouncing the marriage vow my fancy involuntarily wandered to that scene where I had hoped to support myself with éclat and reputation. 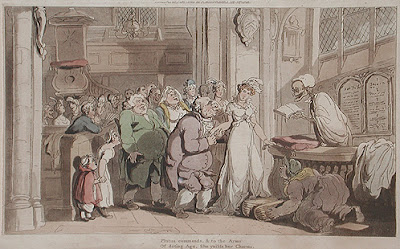 The ceremony was performed by Dr. Saunders, the venerable vicar of St. Martin's, who, at the conclusion of the ceremony, declared that he had never before performed the office for so young a bride. The clerk officiated as father; my mother and the woman who opened the pews were the only witnesses to the union. I was dressed in the habit of a Quaker–a society to which, in early youth, I was particularly partial. From the church we repaired to the house of a female friend, where a splendid breakfast was waiting; I changed my dress to one of white muslin, a chip hat adorned with white ribbons, a white sarsnet scarf-cloak, and slippers of white satin embroidered with silver. I mention these trifling circumstances because they lead to some others of more importance.

From the house of my mother's friend we set out for the inn at Maidenhead Bridge, Mr. Robinson and myself in a phaeton, my mother in a post-chaise; we were also accompanied by a gentleman by the name of Balack, a very intimate acquaintance and schoolfellow of my husband, who was not apprised of our wedding, but who nevertheless considered Mr. Robinson as my avowed suitor. On his first seeing me, he remarked that I was "dressed like a bride." 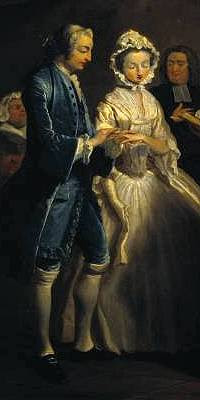 The observation overwhelmed me with confusion. During the day I was more than pensive–I was melancholy; I considered all that had passed as a vision, and would scarcely persuade myself that the union which I had permitted to be solemnised was indissoluble. My mother frequently remarked my evident chagrin; and in the evening, while we strolled together in the garden which was opposite the inn, I told her, with a torrent of tears, the vouchers of my sincerity, that I was the most wretched of mortals ! that I felt the most perfect esteem for Mr. Robinson, but that, according to my ideas of domestic happiness, there should be a warm and powerful union of soul, to which I was yet totally a stranger. 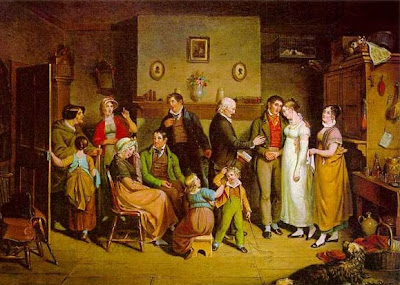 Read more about weddings during the Georgian and Regency Eras:

Oh, wow... Ms Place. Thanks so much for the article. Now I can appreciate Jane Austen even more for NOT getting married without affection.

Truly sympathized with Mary Robinson... what a waste of heart and talent to marry such a jerk!

So, the banns must be read three times in the church before the wedding, eh? Why... I don't think Jane and Tom would pass even one, considering how many people in the Lefroy family that wanted him to marry well...

Icha, I finally had a chance to research your question. According to one site, Regency Errors by Alison Lane http://www.eclectics.com/allisonlane/common_regency_errors.html,

Banns must be called in the parishes of both parties for three consecutive Sundays, inviting anyone to come forward if they know of any reason why the wedding should not proceed. If two parishes are involved, certification of banns and eligibility to wed must be sent from the second parish to the officiating clergyman before the wedding can proceed.

There is a way to get around reading the banns:

The couple may buy a wedding license from any bishop that allows the wedding to proceed without reading the banns. All other restrictions still apply, including a three-week wait between getting the license and holding the wedding. The license must be on display during that 21-day period. If more than one parish is involved, the second parish must still inform the officiating clergyman in writing that no impediment exists to the marriage.

And a special license could be procured from the Archbishop of Canterbury so that the couple could be wed outside their parish.

Hello - just a note of caution in taking Mary Robinson's memoir at face value; there are a number of places in the book where the facts are well and truly glossed over - it is a spin.