Two days and counting until airing of Persuasion. The excitement is building for the PBS presentation of Jane Austen's classic love story of loss and redemption. One of Austen's famous qualities as a writer, was her unique ability to craft characters that exemplified a wide range of personality traits, good and bad. In preparation for the viewing, see if you can determine who you will admire or admonish.

Miss Anne Elliot: heroine, spinster, age 27, second daughter of Sir Walter Elliot, resembles her deceased mother, Baronial household manager by default, enjoys long walks through the estate grounds to get away from family, plays pianoforte on demand, easily persuaded but lives to regret it, incredibly patient with prickly sisters and fussy father, looking for second chance at love, prefers re-hookup with dashing naval officer that she once scorned.

Captain Fredrick Wentworth: hero, bachelor, age 31, ambitious naval officer, recent financial windfall of 25,000 pounds from war booty on the frigate Laconia, cuts a dashing figure by wearing nothing but black (if blue naval uniform not required), enjoys shooting and a good gallop on horseback to vent off steam, rejected in love eight years prior, and seeks hookups with ladies with strong decisive character who know their own mind and are not easily persuaded.

Sir Walter Elliot: Baronet of Kellynch Hall, Somersetshire, widow, age 54, father to Elizabeth, Anne & Mary, spendthrift, relies heavily of the skills of his valet and tailor to puff up his vanity, enjoys the view in the mirror over a window, only reads pedigrees in the “book of books” - the Baronetage, skilled at shouting commands and avoiding his creditors.

Miss Elizabeth Elliot: discontented prima donna, spinster, age 29, first daughter of Sir Walter Elliot, mistress of Kellynch Hall by default through her mother's death, spendthrift, golden child, as vain as her father, enjoys the delights of London society and bossing her younger sisters about, feeling the tick tock of her biological clock, seeks hookups with titled & wealthy nobility only please. 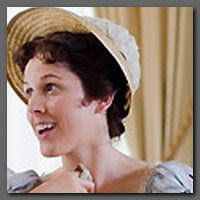 Mary Musgrove nee Elliot: hypochondriac, age 23, third daughter of Sir Walter Elliot, married to Charles Musgrove, Esq. of Uppercross in Somersetshire, mother of 2 sons, chief occupation lying prostrate on a settee and moaning, enjoys nothing, has no known accomplishments except being very good at whining, favourite word is 'no'.

Lady Russell: meddler, widower of Sir Henry Russell, of steady character and age, god-mother, friend and advisor to neighbour Anne Elliot, unromantic and pragmatic, enjoys long walks in the garden persuading young ladies to dump young handsome naval officers because they are poor and untitled, well-to-do and no hookups wanted

William Walter Elliot: schemer, widow, age about 30, nephew of Sir Walter Elliot & heir presumptive of his estates, studied law but does not practice, gold-digger, enjoys marrying rich tradesmen’s daughters who die mysteriously once the money is gone, out of favour with Sir Walter Elliot for flirting with his daughter Elizabeth and not following through, smooth, affable and slippery, seeks hookups with titled and or wealthy ladies with the possibility of their quick demise.

Continue reading the next post for the Minor Cast of Characters!


Be sure to check your local PBS station for air times. Will the Elliot family retrench from financial ruin? Will her scorned suitor Captain Wentworth marry a younger woman? Will our heroine Anne Elliot escape her family and find true love? Join in all the anguish, drama and romance on Master Piece Classic, PBS, Sunday, January 13, at 9:00 pm.
Posted by Laurel Ann
at 1/11/2008

On British Nobility Titles, perhaps you would like to check the following sites to get the idea:

Thank you Cinthia for pointing this out and the insiteful explanation. Those wonderful people at The Repblic of Pemberley are such an excellent resource. I hope that you enjoy the viewing of Persuasion, and thanks for visiting. Cheers, Laurel Ann

You are very welcome, Laurel Ann (now I spelt it well) :)

I have already seen the new P adaptation, as it was broadcasted in my country last week (and before that you can imagine in which site) and I must say it leaves much to desire, not that I hate it, but still, not my cup of tea, many flaws and no improvements over what has been previously done.