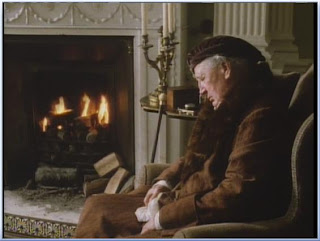 [Emma] dearly loved her father, but he was no companion for her. He could not meet her in conversation, rational or playful. The evil of the actual disparity in their ages (and Mr. Woodhouse had not married early) was much increased by his constitution and habits; for having been a valetudinarian all his life, without activity of mind or body, he was a much older man in ways than in years; and though everywhere beloved for the friendliness of his heart and his amiable temper, his talents could not have recommended him at any time. - Jane Austen, Emma, Chapter One 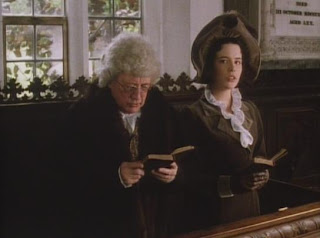 This post continues the bad daddy theme from Persuasion and Northanger Abbey. Mr. Woodhouse might not be as vain as Sir Walter, manipulative as General Tilney, indifferent as Mr. Bennet was towards his three younger daughters, or blindly ambitious as Mr. Bertram was for Maria, but this childlike and fearful man is one of Jane Austen's most memorable and comical secondary characters. Mr. Woodhouse's utter dependence on his youngest daughter, and inability to release her to make her own life with Mr. Knightley makes him a poor standard bearer for fatherhood.

You can tell that actor Bernard Hepton relished playing the part of Mr. Woodhouse. Even during the scenes in which he did not have any lines, his body language and facial expressions were priceless. In many ways Bernard's portrayal of Mr. Woodhouse tipped my preference towards the A&E version of Emma over the theatrical release with Gwynneth Paltrow. Mr. Woodhouse's bits and pieces of advice are captured in this wonderful Republic of Pemberley site, The Benevolent Society for the Preservation of the Good Name of Mr. Woodhouse. Below sit a few fruits of his wisdom as translated in movie scripts: 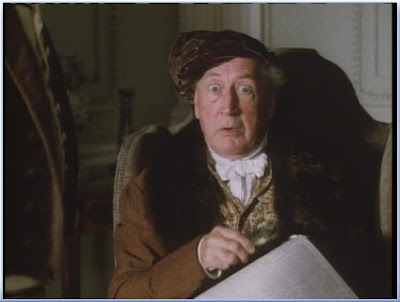 Mr. Woodhouse: Must the church be so drafty, Mr. Elton? It is difficult to surrender one's soul when one is worried about one's throat.
Mrs. Weston: Perhaps some tea and cake would revive you, Mr. Woodhouse.
Mr. Woodhouse: Cake! Surely you're not serving cake at your wedding, Miss Taylor! Far too rich, you put us all at peril! Where is Mr. Perry, the apothecary? I'm sure he will support me!

Mr. Knightley: Triumph? You made a lucky guess!
Emma: Have you never known the triumph of a lucky guess? Had I not promoted Mr. Weston's visits and given encouragement where encouragement was needed, we might not have had a wedding today.
Mr. Woodhouse: Then please, my dear, encourage no one else. Marriage is so disrupting to one's social circle.

Mr. Woodhouse: "Mrs. Bates, let me propose your venturing on one of these eggs. An egg boiled very soft is not unwholesome. Serle understands boiling an egg better than any body. I would not recommend an egg boiled by any body else—but you need not be afraid—they are very small, you see—one of our small eggs will not hurt you. Miss Bates, let Emma help you to a little bit of tart—a very little bit. Ours are all apple tarts. You need not be afraid of unwholesome preserves here. I do not advise the custard.

Emma: Has an invitation arrived for a party at the Coles?
Mr. Woodhouse: No, thank Heaven. The Coles are nice people, but we should have to go outside to get there.

Learn more about Bernard Hepton at these two sites: