Persuasion: Fashion in the Age of Austen 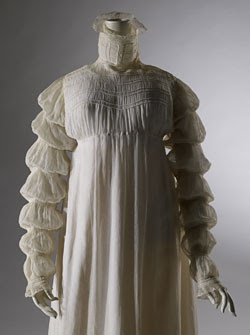 This week the National Gallery of Victoria in Australia will feature a fashion show that I would give my eyeteeth to see - Persuasion: Fashion in the Age of Jane Austen, which will be shown in the Myer Fashion and Textiles Gallery and will run from May 22 to November 8th. Best of all, the show is free to the public. The exhibit will feature over 70 works, largely from the museum collection, and survey the period between1770 and 1830. Prints and drawings, decorative arts and paintings with a focus on English women’s dress from the early 19th century will be shown alongside these fabulous outfits, and key works from other Australian institutions and private collections will also be included. Many of the items in the NGV's holdings were collected in the 1960s and 70s by collectors Anne and Leo Schofield. 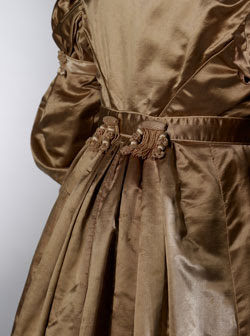 Jane Austen's fashionable characters in her novels, like Lucy Steele or Mrs. Allen, were portrayed as being rather silly. "It was not considered proper for anyone to talk endlessly about fashion," said Roger Leong, the NGV's curator of international fashion and textiles. "The characters who do talk at length about clothes are always the most idiotic." Yet Jane wrote about fashionable details in her letters to her family, and as Leong noted, "Austen's witty and perceptive comments about fashion mirrored the complex relationships within English society during her lifetime, especially between different classes and men and women." 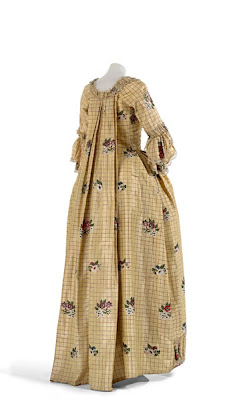 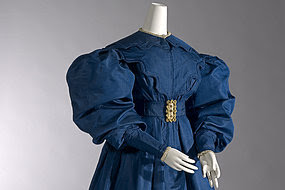 Fashion changed dramatically during Jane Austen's lifetime. In 1775, the year of her birth, women wore constricting dresses with corsetry, hoops, or panniers. When Jane was in her 20's, the neoclassical influence had taken over. Women's clothes were high-waisted, streamlined, relatively unembellished, and made with soft muslin or diaphanous cottons. Towards the end of Jane's life in 1817, dresses were once more decorated with tucks, ruffles, and lace. Waists came down, the hour-glass silhouette returned, and stiffer fabrics and silk satins came into vogue again. "The variations of the waistline, upwards from the natural waist and then back again, were a distinctive characteristic of the time, one of the most dynamic periods in fashion," Leong said. The curator also observed that our knowledge of fashion during Jane's era comes largely from period films. He particularly admires "the costumes designed by Jenny Beavan and John Bright in Ang Lee's film Sense and Sensibility, which cited fashions from the 1790s, when Austen was writing the novel, rather than 1811, when it became her first published book."* 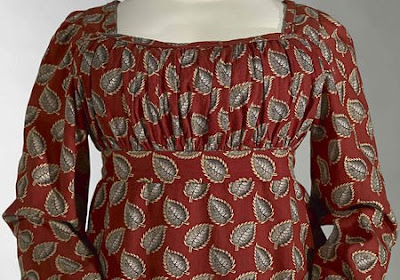 While empire dresses were popular for only a short period, they seem less cumbersome and restrictive to our modern eyes than the constricting fashions of the Georgian and Victorian eras. For modern fans, a costume worn by Colin Firth in 1995's Pride and Prejudice will be on display. (Rumor has it that it is a white shirt.)
Images:
1. Muslin dress, 1815-16
2. Detail of Pelisse, 1816, silk satin
3. Open robe, 1770
4. Carriage dress, 1830, silk
5. Round gown, 1802
Posted by Vic, Jane Austen's World
at 5/19/2009

Oh wouldn't it be lovely to go to that!

As I have mentioned before, I love the clothes and fashion of those times.

A t-shirt, shorts and flip flops may be easy to throw on and go in but the fun of being a woman is dressing up and accessories and it is so much prettier !

Too far to be there, unfortunately, but I'd love to!

The stars have all aligned and I shall be in Melbourne this weekend ...

What lovely clothes! Will they produce a catolgue of the items diplayed? So usefull to those of us who like to sew...

Since none of us can be there , how about Racquel doing a guest post with photos of the event ??? I would just love that !

I'm a fan of the Watteau back in modern dresses and jackets myself. it translates surprisingly well.

I was able to visit this exhibition when I was in Melbourne a couple of weeks ago. I can't describe how excited I was to be there and see all those beautiful dresses! To think that for some of them, they were hand stitched is truly amazing! And so tiny! There was one dress that looked like it would barely fit a small 8 year old girl today and yet was probably made for a girl at least 16. I bought the book that went with the exhibition, so I'll see if I can scan it and send it to you.