Interview with Ben Winters, Author of Android Karenina and Sense and Sensibility and Sea Monsters 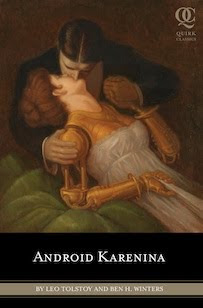 Inquiring readers: Ben H. Winters bravely left a comment on my in-depth analysis of his new steam punk mashup, Android Karenina. I was verklempt. Imagine, a famous author visiting my humble blog! I am still waiting, but in the meantime, Ben was kind enough to answer a few questions.
Hi Ben: Thank you for agreeing to participate in this Q&A. I must say that you made a fan out of me when you left that gracious comment on my blog.

Even though I was unable to complete more than one paragraph in the first Chapter of Android Karenina, I thought that you managed to capture an amazing amount of angst and subtext in the opening lines. Did you want readers to learn anything from your book?

Well, yes and no. First and foremost, it’s a work of popular entertainment, so the goal is for readers to have a good time -- to laugh, to be drawn in by the characters and pulled along by the story.

At the same time, there is some food for thought to be had here, if a reader is up for it. For example, Tolstoy’s original is full of anxiety about how technologies like the steam engine and the telegraph are transforming society. By vastly accelerating the pace of that technological change, and deepening the violence that surrounds it, I’ve juiced that anxiety, and (potentially) asked the reader to consider how rapid technological innovation is changing our contemporary society.

You should try reading it again. The second paragraph is amazing.

Yes, er, *cough.* What did you do before you began to write mashups? 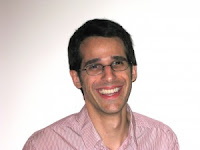 Quirk Books covers are fantastic, as are the pen and ink drawings inside their books. Do you have any say over the artists?

Zero, but I’m totally smitten with their work. Both Doogie Horner, who designs the books, and Eugene Smith, who does the illustrations, are total geniuses. As a rule, authors are disappointed with the art of their books -- I am the enthusiastic exception to that rule.

Did you develop those incredibly inventive reader's discussion guide questions or did it take a village?

No, that’s me (and thanks!). With both Sea Monsters and Android, the “discussion guide” was the last thing I wrote, and it was so much fun. Also quite liberating to write in my own voice, after a few hundred pages of trying to channel someone else.

When Android Karenina makes the Oprah book club, how do you think you will handle all that fame and mulah?

My plan will be to tell Oprah some outrageous lie, like I was raised by a family of crack-addicted wombats or whatever, so that I can later go back on the show and beg her forgiveness, thereby doubling my national television exposure. 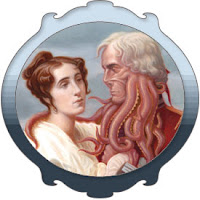 I have to say, the vast majority of Jane Austen fans have been enthusiastic about Sea Monsters -- but if there’s one thing that causes you folks to get your complicated 18th-century undergarments in a bunch, it’s Brandon’s face.

For the record, it was Austen who made the poor guy rheumatic and awkward and so terribly, terribly old (“on the wrong side of five-and-thirty”) All so Marianne can learn an important lesson about true love; all I did was put a fine point on that lesson. A fine, writhing, squishy, tentacled point.

Well, Ben, I must admit that was a pretty lame answer, but nevertheless I think you have charmed a host of Jane Austen fans. Thanks for being such a good sport. May you be able to purchase many Class I and Class II robots with the sales of your mashups.

Thank you! I think people like me write books like this for the same reason you take the time and energy to write a blog like yours: Because we take joy in literature.

Yes, we do have that joy in common! One last question. Do you have any interest in dating my niece? She makes Cameron Diaz look ordinary.

How absolutely wonderful! He sounds fun. Way to score an awesome interview.

What a disappointment to learn that he's married, though given how smart and adventurous he sounds, it's not all that surprising.

Bwah haha! That was fun. I'm almost tempted to read the book.

Wow Vic, you have a new calling in life. Interviewing impertinent upstart authors who have a sense of humor lightly less wacky than yours. But what about the cat? He can't leave us hanging. And your hotter than Cameron Diaz niece. Where is Mrs. Jennings when you need her? Bet Gerry Butler would be game. Wouldn't it be nice to be HIS in-law?

That is a great interview, Vic.

However I can't quite get it into my head the reason he writes them.

"I think people like me write books like this for the same reason you take the time and energy to write a blog like yours: Because we take joy in literature."

I take a joy in literature too but I don't want to write classic spin offs or a spin off of any novel.

If I felt inclined to write fiction I would have a go at writing something original.
I won't, because I can't by the way.
So you are all safe there.

Ah, yes, Laurel Ann. Gerry Butler *sigh* Thanks for stopping by, knowing how busy you are with your Pride and Prejudice event at Austenprose.

Tony, I so agree with you about spin offs, but Ben is such a good sport and witty. I never had a faster turn around for an interview!!

Ha Ha - this was fun! Thanks for sharing!

Best laugh I've had all day! I wonder if the book is as funny as its author.

Great interview !
BTW, if he really does get into the Oprah Book Club,he'll have a free ticket to a bestseller !!!

P.S. I agree with Southerner/Tony...