Rev. George Austen was by all accounts a handsome man. Anna LeFroy, Jane's niece wrote, “I have always understood that he was considered extremely handsome, and it was a beauty which stood by him all his life. At the time when I have the most perfect recollection of him he must have been hard upon seventy, but his hair in its milk-whiteness might have belonged to a much older man. It was very beautiful, with short curls about the ears. His eyes were not large, but of a peculiar and bright hazel. My aunt Jane's were something like them, but none of the children had precisely the same excepting my uncle Henry.”

George Austen was born in 1731. His mother died in childbirth and his father died a year after marrying a new wife, who did not want the responsibility of taking care of the young lad. George then lived with an aunt in Tonbridge and earned a Fellowship to study at St. John’s. He received a Bachelor of Arts, a Master of Arts, and a Bachelor of Divinity degree at Oxford. Called "the handsome proctor", he worked as an assistant chaplain, dean of arts, Greek lecturer while going to school.

He first met Cassandra Leigh in Oxford when she was visiting her uncle Theophilus. After they married, George became rector in several country parishes. The family grew by leaps and bounds, and eventually he and Cassandra Leigh had six sons and two daughters. Shortly after Jane was born, her father said: "She is to be Jenny, and seems to me as if she would be as like Henry, as Cassy is to Neddy.”

By all accounts George and Cassandra Austen had a happy marriage. His annual income from the combined tithes of Steventon and the neighboring village of Deane was around 210 pounds. The sales of his farm produce also supplemented his income. With so many mouths to feed, the family was not wealthy, to say the least. To augment his income even more, Rev. George Austen opened a boarding school at Steventon Rectory for the sons of local gentlemen.

Rev. Austen encouraged Cassandra and Jane to read from his extensive library. For entertainment, the family read to each other, played games, and produced plays. George Austen must have been proud of his daughter's accomplishments. He tried to get Pride and Prejudice published. The "Memoir" by Edward Austen-Leigh contains a letter from George Austen to Mr. Cadell, the publisher, dated November 1797, in which he describes the work as a "manuscript novel comprising three volumes, about the length of Miss Burney's 'Evelina'" and asks Mr. Cadell if he would like to see the work with a view to entering into some arrangement for its publication, "either at the author's risk or otherwise." Unfortunately, nothing came of this query, but P&P became hugely popular among the friends and family who read it before it was published in a much shorter form. The original 3-part manuscript no longer exists. Regardless, countless readers have delighted in the much shorter version for 200 years.

The Rev. George Austen died January 21, 1805, where the Austen family had moved after living in Steventon for over 30 years. (The silhouettes above are of George and Cassandra). On the 2nd. January 1805, Jane Austen wrote sorrowfully to her brother, Frank: "We have lost an excellent Father. An illness of only eight and forty hours carried him off yesterday morning between ten and eleven. His tenderness as a father, who can do justice to?"

"Under this stone rests the remains of
the Revd. George Austen
Rector of Steventon and Deane in Hampshire
who departed this life
the 1st. of January 1805
aged 75 years."

Double click on this grave marker to read the words. (From: Find a Grave Memorial) 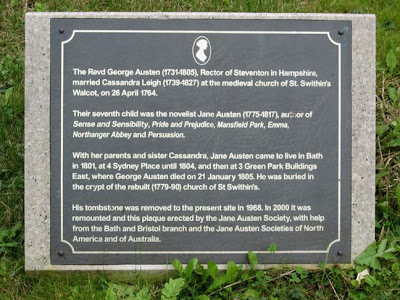 Thanks for the post, Ms Place. I think Mr. Austen was the best father Jane could ever ask for. The way he constantly supported his daughter &c are just amazing.

And weird of weird... you had this post by the time I was talking of Mr. Austen as well in Jane's letter (17 Nov 1798) and the Claire Tomalin review. I swear, our sites are linked mentally! :-D