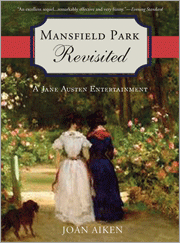 Mansfield Park Revisited: A Jane Austen Entertainment is a re-release of a Joan Aiken novel that was originally published in 1984. The book begins four years after Fanny and Edmund marry. Sir Thomas Bertram has died unexpectedly and his interests in Antigua need tending. Fanny and Edmund, now parents, are chosen to go, since Lady Bertram is hesitant to part with Tom, the heir. They take their son with them but leave their young daughter behind. As readers, we re-meet Fanny briefly, but the major protagonist is Susan Price, her young sister, who has turned into a sensible young woman - more forceful in her opinions and actions than Fanny - but equally devoted to Lady Bertram’s comfort.

Mrs. Norris has also died. Julia Yates, sister to the pariah Maria (did Jane Austen intend for those two words to rhyme?) takes over the Mrs. Norris role as a petty, peevish, mean, and spiteful woman.

“Miss Julia Bertram, having been so ill-judged as to marry the younger son of a peer, had soon, on becoming more closely acquainted with the limited extent of her huband’s fortune, decided to quit the doubtful pleasures of life in London on a straitened income, and console herself by becoming queen of a smaller society. She had persuaded her husband, the Honourable John Yates, to purchase a respectable property in Northamptonshire, not too far distant from Mansfield Park, therefore able to be illumined by some of its lustre. Since the, by almost daily visits to Mansfield, and by longer visits amounting to several months during the course of the year, Mrs. Yates was able to reduce materially her own domestic expenditure …”

While Julia tries to make Susan’s life miserable, she does not succeed, for Susan can see right through her. Thus she ultimately fails to put Susan in her place, despite her repeated attempts to lord it over her younger cousin. Tom and Susan are like oil and water for no discernable reason, except that Tom feels that Susan often oversteps her bounds and Susan thinks him lacking in substance and character. He spends his time learning the ropes as the heir to the Bertram fortune and pursuing his love of horses and racing. More sober and grown up than the man limned by Jane Austen, Tom still has much to learn about life and women.

Joan Aiken’s talent lies in developing Jane Austen’s characters further, and she captures Lady Bertram with exquisite perfection in passages such as this, when Edmund suggests leaving his daughter, Mary, behind:

“ The little dear. Of course we shall be happy to have her," sighed Lady Bertram, anticipating no inconvenience to herself in this arrangement, as indeed there would not be, for she could be quite certain that three-year-old Mary would be devotedly cared for by her aunt Susan.

Mary and Henry Crawford re-appear in the district shortly after Fanny and Edmund depart, which is when the plot truly becomes interesting. Without giving too much away let me just say that I was surprised by the turns this book takes. Mary Crawford has changed greatly, which is all I will reveal, except to mention that Tom becomes intrigued with her and that their association changes his life in a significant way. We also re-meet William, Fanny’s and Susan’s brother, who has now become the captain of his own ship. Several other new and interesting characters are also introduced, which keeps the story fresh.

Joan’s tale moves quickly and at times I could not put the book down. What I found missing from this very short but good novel was Jane’s sure sense of irony and wit. Ms. Aiken has writing talent (how could she not, being Conrad Aiken’s daughter and Jane Aiken Hodge’s sister?) but she fails to convey the tender emotions and human insights that distinguish a great author from a good writer. One key scene in the novel fell decidedly flat, and where I should have cried I could not. Ms. Aiken's description of the event was so matter-of-fact she might have been describing a simple farewell instead of a wrenching death scene. I kept contrasting this scene with the way Jane Austen wrote about Marianne's illness in Sense and Sensibility, and it was like comparing night to day.

As I said, the book is short (201 pages) and perhaps this is why I felt a bereft at the end. I wanted more time spent on how Tom and Susan finally change their minds about each other and begin to think of the other in a romantic way. As usual I am finding fault where others may not, for all in all I enjoyed the book thoroughly. Joan Aiken (1924-2004) might not have the stature of a Jane Austen, but she was a darned good writer and could spin an interesting yarn.

You can purchase the book from SourceBooks at this link.
Reviewed by Vic, Jane Austen's World
at 10/24/2008

Ah, I'll have to investigate this book, thank you!

I had a mind-ramble about a continuation of MP that involved Susan and Tom coming together at the end, so I'm glad I'm not the only one who thought that was a good idea.

I'm glad you mentioned that Jane Aiken Hodge was Joan's sister. I have read her regencies, which are sweet.

joan aiken wrote one of my favorite childhood reads, "the wolves of willoughby chase" and i had no idea she had dabbled in the austen sequel business. thanks for pointing it out.

I have often wondered if Austen included Susan Price as a character; for development in another novel. How wonderful that Aiken siezed the opportunity.

I recently reviewed this novel as well. Very short, but I enjoyed it!